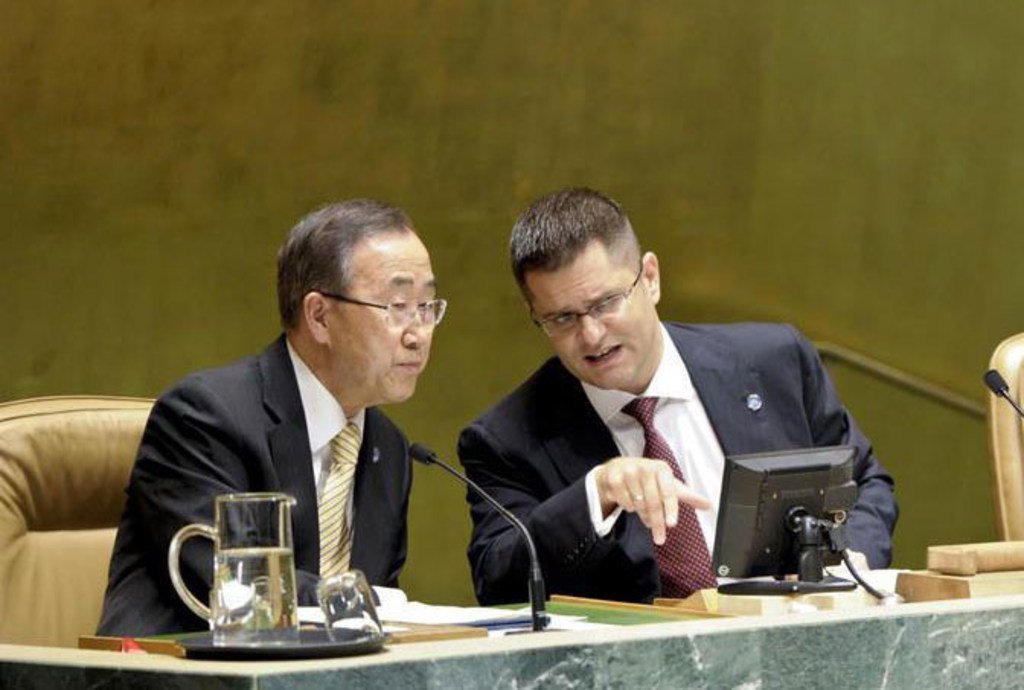 UN Photo/Evan Schneider
President of the General Assembly Vuk Jeremić (right) with Secretary-General Ban Ki-moon at the opening of the 67th session of the Assembly.
18 September 2012
UN Affairs

“Peace and security is a prerequisite for the stability needed for global economic growth, sustainable development and social progress,” said the President of the 193-member body, Vuk Jeremic.

Mr. Jeremic outlined the main areas of focus for this year’s session, with the overarching theme being the peaceful settlement of international disputes. “I hope this framework will usefully serve the noble cause of preventing gathering conflicts and resolving existing ones.”

Peace and security are essential to advance development, Mr. Jeremic said, stressing that the Assembly should focus not just on achieving the eight anti-poverty targets known as the Millennium Development Goals (MDGs), but also on the post-2015 agenda. In particular, he underscored the importance of fulfilling the commitments made during the UN Sustainable Development Conference (Rio+20), which was held in Brazil in June.

“Our objective should be the full implementation of the mandate this body received at the Rio+20 Conference. This will require a decisive commitment to observe not only procedural deadlines but also the political and financial objectives it has been designed to accomplish.”

Mr. Jeremic also highlighted the importance of making progress on arms control and disarmament, strengthening UN peacekeeping, improving a global coordinated response to terrorism, and promoting human rights in the international arena during the next 12 months.

In addition, he emphasized that the rule of law would remain one of the main priorities on the Assembly’s agenda. “Close to 800 years after the Magna Carta was promulgated, many people around the world still do not enjoy the fundamental rights enshrined in that seminal document – rights that protect individuals, while enabling countries to develop in peace and security, as sovereign equals,” he said. “I urge the Member States to agree on a consensus document by the start of the High-Level Debate on the Rule of Law in a few days’ time.”

Secretary-General Ban Ki-moon congratulated Mr. Jeremic on his new role and thanked the former President of the Assembly, Nassir Abdulaziz Al-Nasser, for his leadership over the past year.

He also underlined that the role of the UN is crucial during this period of uncertainty, and called on Member States to deepen their efforts to work together.

“We are living through a period of unease. We are also seeing incidents of intolerance and hatred that are then exploited by others. Voices of moderation and calm need to make themselves heard at this time. We all need to speak up in favour of mutual respect and understanding of the values and beliefs of others,” Mr. Ban said. “The United Nations must rise to the moment.”

The United Nations General Assembly has stood “strong, active and responsive” to the global challenges of the past year, its outgoing President said today, as he concluded the sixty-sixth session.