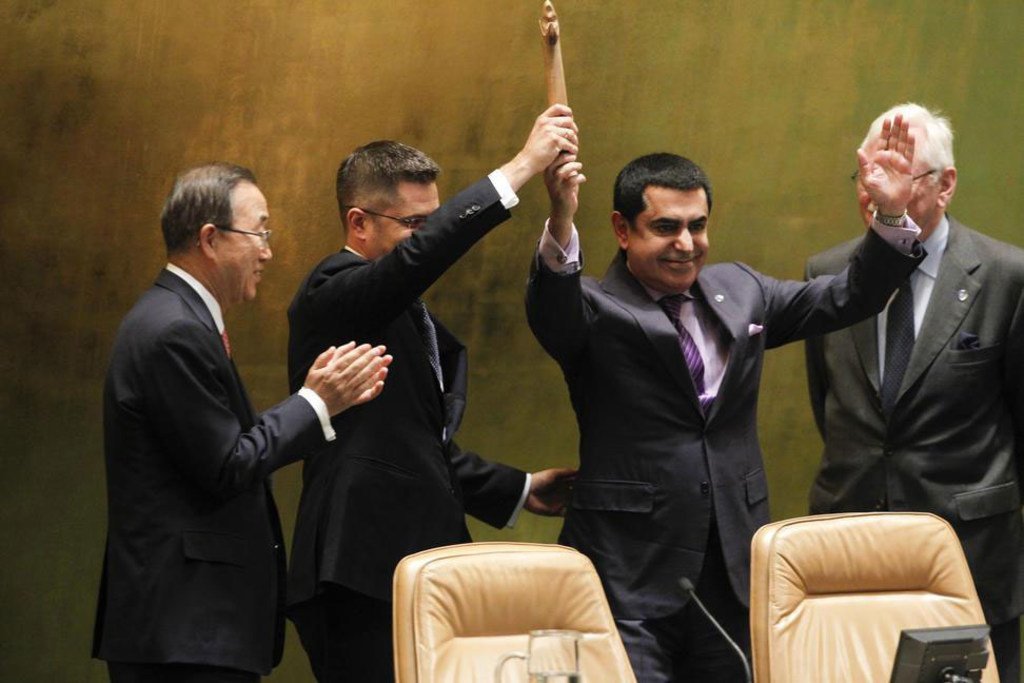 The United Nations General Assembly has stood “strong, active and responsive” to the global challenges of the past year, its outgoing President said today, as he concluded the sixty-sixth session.

“There have been serious conflicts, but also renewed hope, as countries emerged from conflict to peace,” Nassir Abdulaziz Al-Nasser told the 193-member body in his closing remarks, adding that it had been a “remarkable and momentous” year.

“Populations across the world have continued to call for freedom, dignity, peace and justice,” Mr. Al-Nasser continued, as he outlined some highlights, including the Assembly’s support for the wave of democratic protests which engulfed the Middle East and North Africa during the Arab Spring.

The Assembly’s sixty-sixth session commenced last September with the question of Palestinian membership immediately at the forefront of the UN body’s agenda and Mr. Al-Nasser acknowledged that the issue was central to his tenure at the helm of Assembly.

“Although it has not yet been possible to welcome Palestine as a new member to our Organization during my mandate, I am still hopeful that this will happen in the near future,” he stated, urging the next Assembly session “to work collectively for the attainment of a just and comprehensive peace in the Middle East.”

Similarly, Mr. Al-Nasser noted the Assembly’s “key role” in recognizing the new Libyan authorities following the revolution in the North African country and the fall of Colonel Muammar Al-Qadhafi’s 41-year regime. He also underscored the Assembly’s ongoing “crucial role” in ensuring a quick end to the Syrian violence.

Turning to the Assembly’s most salient achievements, however, the President highlighted the four key pillars of his tenure, which he defined as: the peaceful settlement of disputes; UN reform and revitalization; improving disaster prevention and response; and sustainable development and prosperity.

Noting that the past year had been “very significant” for the role of mediation in the settlement of disputes, Mr. Al-Nasser emphasized the importance of the UN Alliance of Civilizations in addressing disputes emanating from cultural or religious differences.

He further argued that the recent violent protests seen in parts of the Middle East and other areas serve as “a stark reminder of the urgent need for us to cultivate and promote tolerance, mutual respect and dialogue among civilizations.”

“I implore citizens of the world to open their hearts and their minds, to celebrate the common values that bind us all in this one human family,” Mr. Al-Nasser continued, while calling for the Alliance of Civilizations to be further strengthened so that “it can fulfil its noble mission more effectively.”

On Security Council reform, the President recalled that the eighth round of intergovernmental negotiations had taken place during his tenure and said that Member States had acknowledged that new momentum and an increased level of “candour, interaction and engagement” had been made on the issue.

Mr. Al-Nasser also drew attention to the growing need for greater disaster prevention and response, placing particular emphasis on the humanitarian crisis which overwhelmed the Horn of Africa earlier in the year. He noted that the international community “needs to be better equipped to respond to disasters, both natural and man-made.”

Finally, on sustainable development and global prosperity, the President celebrated the past session’s “landmark year” on sustainable development issues, noting that the recent Rio+20 Summit in Brazil would “go down in history as the moment when the international community renewed its political will and commitment to tackling the inter-connected economic, social and environmental challenges we face.”

In his address to the Assembly, Secretary-General Ban Ki-moon thanked Mr. Al-Nasser for his work, while underlining the President’s leadership during a year of global upheaval.

“The sixty-sixth session leaves a legacy of achievement, showing again the invaluable role and voice of the General Assembly as the Organization’s leading deliberative body,” Mr. Ban told the delegates.

The Secretary-General spotlighted Mr. Al-Nasser’s “leadership and commitment throughout this period of dramatic developments and complex challenges,” but acknowledged that the UN body had “much work ahead.”

“Pressing ahead to achieve the Millennium Development Goals by the agreed deadline of 2015; articulating a bold and inspirational post-2015 development agenda; sharpening the full range of our tools for peace and human rights; and strengthening this Organization – its effectiveness, its representativeness – to cope with an era of budgetary constraint and high expectations from the people of the world,” he concluded.

The sixty-seventh session opens tomorrow and will be presided over by the incoming President, Vuk Jeremić of Serbia.

The General Assembly concluded its sixty-fifth session today, bringing to a close a year that its outgoing President said saw progress on a number of development-related issues and highlighted the need for the United Nations to do more to respond to the real concerns of people worldwide.