Representatives from more than 40 African countries have gathered at a United Nations-backed conference in Arusha, Tanzania, to discuss the region’s strategy to achieve sustainable development and come up with an integrated strategy for the region to encourage environmental initiatives.

For three days, environment ministers and other government officials at the 14th regular session of the African Ministerial Conference on the Environment (AMCEN) are expected to tackle some of the challenges that threaten the future of the region such as land degradation, climate change, deforestation, low agriculture productivity and poverty.

This is the first time that African environment ministers have met since the UN Conference on Sustainable Development (Rio+20) in Brazil in June, in which more than 100 heads of state and government, along with thousands of parliamentarians, mayors, UN officials, chief executive officers and civil society leaders sought to shape new policies to promote prosperity, reduce poverty and advance social equity and environmental protection.

“The follow up to Rio+20 needs to mark a moment of renewed commitment, greater urgency and a turning point in terms of implementation of what has already been agreed,” said the Executive Director of the UN Environment Programme (UNEP), Achim Steiner, at the AMCEN session’s opening.

“A fully-engaged Africa at the UN General Assembly and beyond can assist greatly in ensuring that the gains made at Rio+20 are not only secured, but acted upon in order to boost the lives and livelihoods of now one billion Africans and six billion others across this extraordinary world,” he added.

The gathering, held under the theme ‘Africa’s Post-Rio Strategy for Sustainable Development,’ is meant to provide a platform for environment ministers to address key issues and take decisions in the wake of Rio+20 and the 19th Summit of the African Union that will help boost sustainable development in Africa.

The meeting, which ends on Friday, is also intended to produce an updated common position to ensure Africa’s participation in the climate talks leading up to the 18th Conference of Parties to the UN Framework Convention on Climate Change (UNFCCC), which takes place in Doha, Qatar, in December, as well as a declaration mapping Africa’s road to sustainable development.

Other key issues to be addressed during AMCEN’s latest session include the strengthening of UNEP and environmental networks in the region, encouraging sustainable consumption and production in Africa, and involving parliamentarians in the implementation of multilateral environmental agreements. 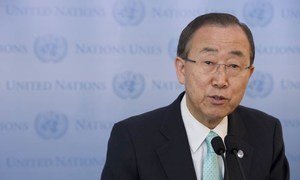 The developing countries comprising the global South have made strides in development and cooperation over the past decade, Secretary-General Ban Ki-moon said today while also cautioning that despite strong advancements, some areas of the region still languish in poverty.