Environment ministers and representatives from over 40 African countries today adopted a set of programmes to boost sustainable development on the continent, agreeing to fully engage with the implementation of the outcome document of the United Nations Rio+20 Conference which was adopted in June.

Environment ministers and representatives from over 40 African countries today adopted a set of programmes to boost sustainable development on the continent, agreeing to fully engage with the implementation of the outcome document of the United Nations Rio+20 Conference which was adopted in June.

For three days, government officials at the 14th regular session of the African Ministerial Conference on the Environment (AMCEN) in Arusha, Tanzania tackled some of the challenges that threaten the future of the region such as land degradation, climate change, deforestation, low agricultural productivity and poverty.

The Conference marked the first time that African environment ministers met since the UN Conference on Sustainable Development (Rio+20) in Brazil in June, in which more than 100 heads of state and government, along with thousands of parliamentarians, mayors, UN officials, chief executive officers and civil society leaders sought to shape new policies to promote prosperity, reduce poverty and advance social equity and environmental protection.

At AMCEN, Ministers adopted documents which will promote an inclusive green economy as well as strengthen the UN Environment Programme (UNEP).

The ministers requested additional measures beyond the Rio+20 agreement, including upgrading regional UNEP offices and establishing five sub-regional offices in Africa, as well as establishing a universal membership body known as the Environment Assembly, with a ministerial segment called the Ministerial Conference on Environment.

The Director of UNEP’s Regional Office for Africa, Mounkaila Goumandakoye, said UNEP would support all the decisions adopted by the ministers.

“In addition to the provision of secretariat services, our support will focus on scientific and technical advisory services as we increase assistance to African countries in the implementation of the Rio+20 outcomes, taking into account the threat that climate change continues to pose,” he said.

“Our collaboration with AMCEN will also focus on programmatic support in the design and implementation of programmes, in line with the regional flagship programmes identified at this session, that respond to the needs and priorities of countries in the areas of sound environmental management,” he added.

Other agreements included a commitment to engage in the promotion of sustainable development, the initiation of an African Green Economy partnership to eradicate poverty and create decent jobs, and an agreement to halt soil degradation in the Sahel region. 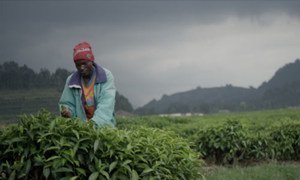 Representatives from more than 40 African countries have gathered at a United Nations-backed conference in Arusha, Tanzania, to discuss the region’s strategy to achieve sustainable development and come up with an integrated strategy for the region to encourage environmental initiatives.