11 September 2012
In a meeting with Lebanon’s Speaker of Parliament, a United Nations senior official today welcomed security developments in the country while emphasizing the need for political stability in a time of regional turmoil.

“I have ... congratulated the Lebanese Government and the security authorities on steps recently taken to address threats to Lebanon’s security and stability,” the UN Special Coordinator for Lebanon, Derek Plumbly, said in a statement following his meeting with Speaker of Parliament Nabih Berri.

The ongoing violence in neighbouring Syria has fuelled sectarian tensions across Lebanon and prompted concerns that the country could plunge back into the internecine violence it endured during its 15 year civil war, which ended in 1990.

The last weeks of August witnessed fighting between supporters and opponents of the Syrian Government in the Lebanese capital, Beirut, which killed more than 12 people, while tensions also increased in other parts of the country, such as the northern city of Tripoli. Moreover, a series of kidnappings have also contributed to the escalating sectarian tensions across Lebanon.

In his remarks, Mr. Plumbly greeted recent media reports stating that a number of those kidnapped had already been released and suggested that the news may indicate that tensions were cooling.

“I welcome this development and hope that we will soon see the release of all those held against their will,” he stated.

He also noted that Speaker Berri had stressed the importance of Lebanese national unity during a period of regional turbulence.

“I must say that I have noted this positive sentiment across the political spectrum in Lebanon,” he said, adding that it mirrored the unity of the international community in providing support for Lebanon’s security and stability.

Turning his attention to the country’s elections in 2013, Mr. Plumbly underscored the UN’s preparations for providing Lebanon with electoral assistance via a specialized election unit which will offer the Ministry of the Interior technical assistance and advice.

“We look forward to working with all in Lebanon to help ensure free, fair, and transparent elections next year,” he stated. 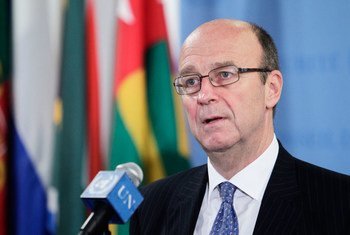 4 September 2012
The growing number of Syrian refugees is proving to be an increasingly heavy burden on Lebanon, a United Nations senior official said today in his meeting with the Lebanese Prime Minister, during which he also expressed concern over the security situation along Lebanon’s border with Syria.