UNHCR/J. Tanner
UNHCR Special Envoy Angelina Jolie meets with refugees on the Jordanian border minutes after they crossed from Syria.

11 September 2012
As the number of Syrians fleeing their country continues to increase, the head of the United Nations refugee agency and that body’s special envoy, Hollywood actress Angelina Jolie, visited a camp in Jordan, where they met some of the of thousands of people that have crossed the border to escape the violence in the Middle Eastern country.

As the number of Syrians fleeing their country continues to increase, the head of the United Nations refugee agency and that body’s special envoy, Hollywood actress Angelina Jolie, visited a camp in Jordan, where they met some of the of thousands of people that have crossed the border to escape the violence in the Middle Eastern country.

High Commissioner António Guterres and Ms. Jolie visited the Za’atri refugee camp, located in a desert region near the Syrian border, and currently holding some 28,000 refugees, out of a total of 85,000 Syrians who are currently registered or awaiting refugee registration in Jordan.

“I am grateful to Jordan and other border countries for keeping their borders open, for saving these people’s lives. They are dying in Syria,” Ms. Jolie said a media encounter today. “If they were unable to escape with their families many of the people here, many of the people I met today would in fact be dead. It’s an extraordinary thing that they are doing.”

According to the Office of the UN High Commissioner for Refugees (UNHCR), the actual number of refugees in Jordan is thought to be much higher, and, overall, more than a quarter of a million people have now been registered with the agency, or are awaiting registration in countries around Syria.

Syria has been wracked by violence since an uprising began against President Bashar al-Assad some 18 months ago. More than 18,000 people, mostly civilians, have died since fighting broke out though reports indicate a major escalation of violence in recent weeks in many towns and villages, as well as the country’s two biggest cities, Aleppo and Damascus.

Addressing the media in Geneva today, a UNHCR spokesperson, Adrian Edwards, said the visit was aimed at not only showing solidarity with refugees, but also to recognize the commitment of the Jordanian people and Government to protect vulnerable civilians.

“Refugees tell us that artillery and air attacks are continuing in villages and towns close to the Jordanian border,” Mr. Edwards said. “There are reports of thousands of displaced people in Syria’s south, moving from village to village seeking safety before they can cross the border.”

Last night, Ms. Jolie visited Jordan’s border with Syria, where she met newly-arriving families – some 200 families made the dangerous crossing that night; shelling could be heard in the distance.

“It’s been a very heavy experience because often times you come to these camps,” the Special Envoy said. “We have all been around and met with people in conflict situations, but rarely do you come when you meet them as they cross the border and you get to know people the moment they become a refugee, the moment they have lost their home, their schooling, their livelihoods, their education, everything that they have been is gone. And when I asked them, ‘what did you bring?’ they say this, and they show [their] back.”

“We do encourage the international community to do everything it can to support these people and to support them here until they can go home one day. There is much that needs to be done,” Ms. Jolie said. “It’s a very, very difficult situation and of the appeals that came out – which still have not been met – [they] weren’t even prepared to take into account the extent of what was going to happen, how many people. It grows. The numbers are growing. The conflict is growing.”

Following their visit to the camps, Mr. Guterres and Ms. Jolie are expected to meet King Abdullah II of Jordan, as well as the country’s prime minister and foreign affairs ministers.

UNHCR, along with the Jordanian Government and its partners, is working to assist displaced persons. However, the agency states that the conditions at Za’atri camp – located in windswept desert – are harsh, with many refugees living in tents.

“With winter approaching, we hope to be able to move people into prefabricated housing, which is arriving at a rate of up to 30 homes a day, giving priority to the most vulnerable families,” Mr. Edwards said at the Geneva media briefing.

Addressing the same briefing, a spokesperson for the World Health Organization (WHO) reported that more than 550,000 people are in need of health assistance in Syria’s Homs municipality alone.

“There are 150 schools hosting internally displaced persons. The shelters that have recently opened provide poor living conditions, there is no electricity and the water and sanitation conditions are not functioning properly. Refuse is piling up - and has not been collected for several weeks,” the spokesperson, Tarik Jasarevic, said.

He added that lack of access to health care facilities and health workers is one of the main obstacles being faced, with at least 50 per cent of medical doctors having left Homs. “At present, many of the health facilities are staffed with volunteers who have no medical or health training,” he noted.

WHO, which recently participated in a UN exploratory mission to Homs to assess how it can increase its presence there, is currently delivering basic health and water testing kits. It has also requested $31 million in funding support for its activities in the Syria Humanitarian Response Plan, to effectively respond to humanitarian health needs inside the country.

Earlier this month, the United Nations and its partners increased their humanitarian appeal for the Response Plan from $180 million to $347 million, due to the doubling of the number of people in need since July, to 2.5 million. 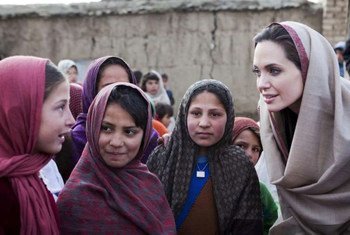 17 April 2012
The UN refugee agency announced today that actress and humanitarian Angelina Jolie will take on a new and expanded role as a Special Envoy of its High Commissioner, António Guterres.