UNHCR
UNHCR comes to the assistance of older, disabled and sickly refugees in South Sudan.

24 August 2012
The United Nations refugee agency today voiced alarm about the health situation of more than 100,000 refugees spread out across two states in South Sudan.

“With the current rain and cold, we are seeing refugees suffering from respiratory tract infections, diarrhoea and malaria,” a spokesperson for the Office of the UN High Commissioner for Refugees (UNHCR), Adrian Edwards, told reporters in Geneva.

According to the agency, there are 170,000 refugees living in camps and settlements across South Sudan’s Unity and Upper Nile states. They have arrived from Sudan’s South Kordofan and Blue Nile states after fleeing conflict and food shortages.

In Upper Nile, nearly half the refugees are under the age of 11.

“This is an unusually large proportion in refugee emergencies, and this age group is suffering the most,” said Mr. Edwards. “Their mothers – or other caregivers – are often also sick and weak, and cannot look after them properly.”

In Yusuf Batil, a camp hosting 34,000 Sudanese from Blue Nile state, 15 per cent of children under five – nearly 1,600 children – are severely malnourished. They are now being treated under a special programme to restore them to health.

Earlier this month, UNHCR and its partners launched an extensive health and hygiene outreach programme, with a special emphasis on good basic hygiene.

“We are trying to impress upon refugees the importance of fundamentals like hand-washing, collecting water in clean buckets and jerry-cans and not defecating in the open,” Mr. Edwards stated, adding that the agency and its partners are continuing to build latrines in all five camps in an attempt to keep pace with new arrivals.

All agencies have struggled to maintain adequate hygiene and sanitation, with the number of refugees having increased dramatically from 99,000 in April to the current number of almost 170,000.

There have been significant improvements in the security situation in Jonglei state since the inter-communal violence there claimed the lives of hundreds of citizens at the beginning of this year, according to a statement issued by the Mission.

“Commendable efforts have been made to increase the security and protection of people and their property. However, UNMISS is concerned by the recent increase in serious human rights violations allegedly committed by some undisciplined elements within the South Sudanese Army (SPLA) in Pibor County,” it stated. These troops are deployed to assist the Government’s civilian disarmament programme there, as part of the overall peace process.

“Failure to identify those suspected of human rights abuses, carry out full investigations in all cases, and demonstrate that justice is being done for the victims, will undermine the confidence and collaboration of local communities in the disarmament process, and risks derailing the peace process,” it stated.

A report released by UNMISS in June documented crimes and human rights violations that took place during the cycle of attacks between the Murle and Lou Nuer ethnic groups in 2011 and early 2012. The violence led to nearly 900 deaths, incidents of abductions of women and children, the destruction of homes and the displacement of thousands of civilians. 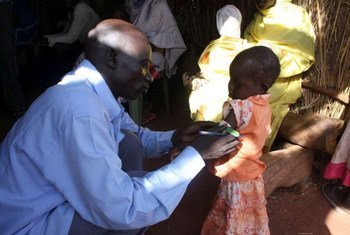 3 August 2012
The United Nations refugee agency and its partners are scaling up efforts to reverse the “alarming” rates of malnutrition, disease and death in two camps hosting Sudanese refugees in South Sudan, even as they struggle to cope with logistical problems amid the rainy season.