L. Greeff/ILO
The killings of more than 30 workers in the Marikana platinum mine have put the spotlight on working conditions in South Africa’s mining industry.

24 August 2012
Although the Government of South Africa has taken important steps to address working conditions in the country’s mines, there is still significant room for improvement, a United Nations expert said today, following one of the worst incidents of strike-related violence in the country since the end of apartheid.

On 16 August, miners striking at the Marikana platinum mine in South Africa’s North West province were fired upon by police during a protest for higher wages and better working conditions.

According to media reports, 44 people were killed during the strike, including 34 miners who died when police opened fire on them. Ten others, including two policemen, were also reportedly killed in earlier strike-related violence.

“More efforts could be made to better implement existing mining regulations, especially when it comes to the health and safety of miners,” said Martin Hahn, a mining specialist for the International Labour Organization (ILO).

Mr. Hahn noted that South African miners were frequently exposed to numerous safety hazards ranging from falling rocks and exposure to fine dust particles to intensive noise, fumes and high temperatures. Many miners also suffer from various diseases contracted while on the job, including tuberculosis and silicosis, a potentially fatal respiratory ailment.

Compounding the health and safety hazards, miners’ wages tend to be very low with higher salaries usually reserved for engineers, managers and other high-skilled workers.

“A lot remains to be done in order to create a much-needed preventive safety and health culture in every single mine and for South Africa to attain the goal of zero fatality,” Mr. Hahn stated, adding that working conditions can vary greatly depending on whether the mine in question was new or old, opencast or underground, and on what variety of mineral was being mined.

He noted, however, that the drop in fatality rates showed that significant efforts had been made to improve the safety of South African mines. Following South Africa’s ratification of the ILO’s Safety and Health in Mines Convention, fatalities in the country’s mines dropped from a reported 774 in 1984 to 128 in 2010.

The South African mining industry has boomed over the past few years as demand for commodities has surged around the world, with an estimated 2.7 per cent of the economically active population employed by the mining sector. 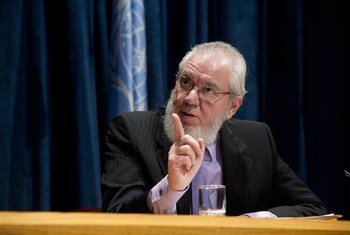 28 April 2012
Protecting the safety and health of workers across the world must be part of transitioning into a green economy, the United Nations stressed today, warning that while sustainable jobs may protect the environment and create new employment opportunities, they may also present a number of unforeseen risks for individuals.