21 August 2012
The United Nations health agency today reported that the cholera outbreak in Sierra Leone was escalating and stressed the need to rapidly scale up the response to the spread of the of the frequently fatal water and food-borne disease.

In a press briefing in Geneva, Glenn Thomas, a spokesperson for the World Health Organization (WHO), confirmed the spread of cholera to an additional two districts of the West African country, noting that since the beginning of 2012, there had been 11,189 reported cases and 203 deaths due to the outbreak.

Mr. Thomas told reporters that the WHO was supporting the Government of Sierra Leone in the areas of epidemiology and social mobilization and had sent three cholera experts form its regional office to respond to the deteriorating crisis.

In his briefing, Mr. Thomas also provided an update on the outbreak of Ebola virus in the Democratic Republic of the Congo (DRC), where a total of 15 cases of viral contamination, including nine deaths, have been reported.

He said that the WHO was supporting the DRC Ministry of Health in conducting a series of epidemiological investigations as well as surveillance, public information and social mobilization initiatives.

Ebola is transmitted by direct contact with the blood, secretions, other bodily fluids or organs of infected persons or animals such as chimpanzees, gorillas, monkeys and antelopes, and it has an incubation period of two to 21 days.

Sufferers can experience fever, intense weakness, muscle pain, headaches and a sore throat, as well as vomiting, diarrhoea, rashes and impaired kidney and liver function. In the most severe cases, the virus leads to both external and internal bleeding. The most recent outbreak happened last month in Uganda with a total of 20 cases, including 14 deaths, reported across the western part of the country.

In its briefing, the WHO added that it did not recommend that any travel or trade restrictions be applied to the DRC because of the outbreak. 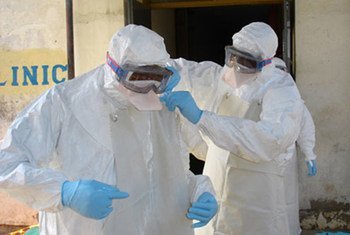 30 July 2012
A team of experts from the United Nations health agency and its partners are supporting the Ugandan Government’s response to an Ebola outbreak in the western part of the country.