FFollowing the first-ever detection of African swine fever (ASF)in Ukraine, the United Nations is warning that while control measures appear to have temporarily halted the disease's spread, it has established a firm foothold in the Caucasus and poses an ongoing risk to neighbouring areas.

Following the first-ever detection of African swine fever (ASF)in Ukraine, the United Nations is warning that while control measures appear to have temporarily halted the disease's spread, it has established a firm foothold in the Caucasus and poses an ongoing risk to neighbouring areas.

“National and local authorities in the entire region should scale up their prevention measures and be ready to respond in case of further outbreaks,” the UN Food and Agriculture Organization's (FAO) Chief Veterinary Officer, Juan Lubroth, said in a news release. “This could be the first of more outbreaks to come, according to our disease analyses.”

In addition to some other parts of Ukraine, nearby countries like Moldova, Kazakhstan and Latvia – which have large pig populations raised on household or family farms, and oftentimes weak bio-security protocols – are also now at high risk of the disease's introduction, according to FAO.

ASF does not affect humans, but mortalities in domestic pigs can be extremely high. In 2011, up to 300,000 pigs died or were culled as a result of ASF outbreaks in the Russian Federation, incurring an estimated $240 million in economic losses.

Mr. Lubroth noted that Ukraine has responded quickly, implementing sanitary measures, destroying affected pigs and imposing a quarantine zone around the village where the outbreaks occurred.

Most importantly, he added, Ukraine has paid farmers compensation for pigs that were slaughtered and properly disposed of, so that poor families that depend on pig-raising for food and income are not left ruined by the loss of their pigs.

All countries at risk should stand ready to detect any ASF outbreaks as soon as they occur and respond in a similarly proactive fashion, according to FAO.

Prior to being introduced to the Caucasus in 2007, ASF had been confined for several decades to the African continent and the Italian island of Sardinia. Today, however, it is considered endemic in parts of the Russian Federation and some countries in the Caucasus region, including Georgia and Armenia. 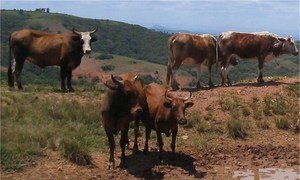