In a speech delivered to the University of Canterbury, in Christchurch, New Zealand, the Administrator of the UN Development Programme (UNDP), Helen Clark, underscored her plan to double UNDP assistance for disaster reduction over the next five years, as well as add five countries per year to the growing list of potential “champions of disaster resilience.”

In 2005, 168 countries endorsed the Hyogo Framework for Action, under which they agreed to achieve by 2015 the substantial reduction of disaster losses, in lives and in the social, economic and environmental assets of communities and countries. With the 2015 deadline fast approaching, calls for a new disaster management blueprint have been gaining traction.

“2015 is the date for achieving most of the Millennium Development Goal targets which have guided international development since 2000,” Ms. Clark said. “Disaster risk reduction needs to become central to mainstream development planning and action, and be reflected in discussions of the overall post-2015 development agenda.”

Ms. Clark’s address followed the recent launch of consultations by the UN International Strategy for Disaster Reduction (UNISDR) on a replacement for the Hyogo Framework for Action.

In her address in New Zealand, Ms. Clark also stated that a new post-Hyogo Framework could specify measurable outcomes rather than just processes.

“The negotiations around the post-Hyogo Framework will be an opportunity to explore financing mechanisms for disaster reduction, particularly at the local level,” she noted, adding that the new framework to replace the Hyogo Framework for Action would also need to focus on building safer cities as most of the world’s population was now urban-dwelling. 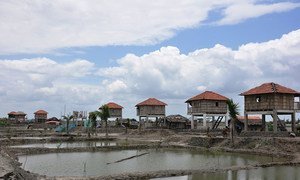 The United Nations office for disaster risk reduction today launched a new initiative to help cities across the world manage risk following the worst year on record for economic losses caused by disasters.