15 August 2012
Syrian Government and opposition forces have perpetrated war crimes and crimes against humanity, according to a new report by the United Nations independent panel probing abuses committed during the country’s ongoing conflict.

Issued today and produced by the UN Independent International Commission of Inquiry (CoI) on Syria under a mandate from the Geneva-based UN Human Rights Council, the report states that war crimes, including murder, extrajudicial killings and torture, and gross violations of international human rights, including unlawful killing, attacks against civilians and acts of sexual violence, have been committed in line with State policy, with indications of the involvement at the highest levels of the Government, as well as security and armed forces.

The report, which presents the CoI’s findings based on investigations conducted through 20 July, notes that the situation in the Middle Eastern country has deteriorated significantly in the past six months, with armed violence spreading to new areas and active hostilities between anti-Government armed groups and Government forces and members of the Government-controlled militia known as the Shabiha.

It also notes that more “brutal tactics” and new military capabilities have been employed in recent months by both sides to the conflict.

The report updates earlier findings on the events that took place in the town of Houla on 25 May, concluding that Government forces and Shabiha fighters were responsible for the killings there of more than 100 civilians – nearly half of whom were children.

In early June, the Human Rights Council had called for a “special inquiry” into the Houla massacre. It also adopted a resolution condemning in the strongest terms the use of force against civilians.

While opposition forces also committed war crimes, including murder and torture, the CoI says in its report that their violations and abuses were not of the same gravity, frequency and scale as those committed by Government force and the Shabiha.

It also reiterates the need for international consensus to end the violence and pave the way for a political transition process that reflects the aspirations of all segments of Syrian society.

In a news release issued by Office of the UN High Commissioner for Human Rights (OHCHR), the Commission underlined that the lack of access to the country significantly hampered its ability to fulfil its mandate, and for that reason it continued to collect firsthand accounts of the situation on the ground from people who left the country.

Established in September last year, the CoI has conducted 1,062 interviews since 15 February. Its report is scheduled to be presented at the 21st session of the Human Rights Council on 17 September. 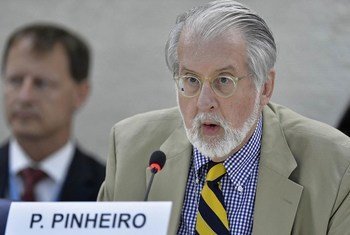 27 June 2012
Citing a dramatic escalation in the fighting in Syria and ongoing human rights violations, the head of a United Nations-backed inquiry today urged the international community to act to put an end to the violence in the Middle Eastern country.