15 August 2012
Secretary-General Ban Ki-moon today praised the people of Timor-Leste for the progress they have made ten years after the country’s restoration of independence, commending the Government for consolidating a security sector that will be able to protect the country as the United Nations peacekeeping mission prepares to leave at the end of the year.

“Timor-Leste has come a long way. You have much to be proud of,” Mr. Ban said in a press conference which he held jointly with President Taur Matan Ruak following a meeting between the two leaders in Dili, the capital.

In May, Timor-Leste celebrated its 10th anniversary since its restoration of independence in 2002. The independence celebrations coincided with the inauguration of Mr. Ruak, who won the presidential elections in April. The country also held parliamentary elections last month, which were largely peaceful and held in an orderly manner, according to observers.

“I commend all Timorese for the successful presidential and parliamentary elections earlier this year. The peaceful and orderly process reflects Timor-Leste’s strong commitment to stability, democracy and national unity,” Mr. Ban said.

Mr. Ban welcomed the progress made by the country’s security sector, and stressed that they would continue to have the support of the UN once the UN Integrated Mission in Timor-Leste (UNMIT), which is tasked with supporting the Government to consolidate stability and enhance a culture of democratic governance, departs at the end of the year.

“For over 16 months, the national police, PNTL, have borne the responsibility for the conduct of all police operations in Timor-Leste. They are not only making a difference here in the country, but around the world. We see that in the form of police and military personnel you are now contributing to UN peacekeeping missions in other parts of the world,” Mr. Ban said.

“This is a powerful testament to the growing professionalism and institutional development of your security forces – as well as your commitment to global solidarity,” he added.

During his visit, Mr. Ban also visited a police academy, where he spoke to members of the national police force and encouraged them to continue to work to make their country safer and focus on longer-term development after UNMIT’s departure.

“The close cooperation between UNMIT police and PNTL has been essential to ensure the continued strengthening of PNTL. We will work with you to address any remaining capacity gaps,” Mr. Ban said.

In his address to the national parliament today, Mr. Ban also outlined three areas that policymakers must focus on to advance the country’s progress. These consist of promoting inclusive growth that reduces inequalities, contributing to the promotion of peace and security, and empowering women and young people.

“As the UN now reduces its footprint in the country, you are continuing to set a global example of how to successfully emerge from conflict to lasting peace,” Mr. Ban said. “As we shape our new relationship, Timor-Leste can count on the United Nations’ steady support as you lead the way forward.”

During his visit Mr. Ban also spoke at the opening of an UNMIT exhibit at the new Museum of the Resistance, and he is scheduled to visit a primary school in Liquiça later today, where he will highlight the role of education for the country’s development. 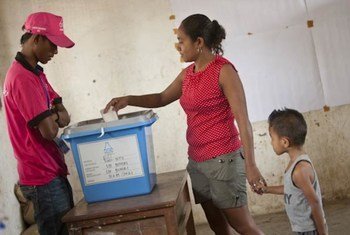 8 July 2012
United Nations Secretary-General Ban Ki-moon has congratulated the people, Government and political parties of Timor-Leste for the peaceful and orderly manner in which the country held parliamentary elections on Saturday.