The nuclear plant closest to the epicentre of the March 2011 earthquake that struck Japan, resulting in a devastating tsunami and radiation leakage at another facility, was “remarkably undamaged,” according to a report delivered today by the United Nations nuclear watchdog.

“The structural elements of the NPS were remarkably undamaged given the magnitude of ground motion experienced and the duration and size of this great earthquake,” according to the draft report of an expert team of the International Atomic Energy Agency (IAEA), following its two-week mission to the Onagawa Nuclear Power Station.

The Onagawa Nuclear Power Station is 120 kilometres north of the Fukushima Daiichi nuclear power plant that was severely damaged during the seismic event, when the building housing the plant exploded and three of its nuclear reactors suffered a meltdown in what was reported to be the worst nuclear accident since the 1986 Chernobyl disaster. A year later, a 19-kilometre exclusion zone still surrounds the disaster site.

The IAEA mission's objective was to observe how safety structures, systems and components responded to the heavy shaking, which was not possible to study at Fukushima Daiichi because of the damage.

Onagawa, facing the Pacific Ocean on Japan's north-east coast, experienced very high levels of ground shaking – among the strongest of any plant affected by the earthquake – and some flooding from the tsunami that followed, but was able to shut down safely, the IAEA said in a news release.

Findings from the visual investigation will be added to an IAEA database being compiled by its International Seismic Safety Centre (ISSC), as part of the IAEA's Action Plan on Nuclear Safety, endorsed by the Agency's Member States following the Fukushima Daiichi event.

“Information in the data base will allow IAEA member states to measure the performance of their nuclear power plants in the face of external hazards,” the mission’s leader and head of the ISSC, Sujit Samaddar, said, adding that the Centre also sought data from Member States other than Japan.

♦ Receive daily updates directly in your inbox - Subscribe here to a topic.
♦ Download the UN News app for your iOS or Android devices.
IAEA 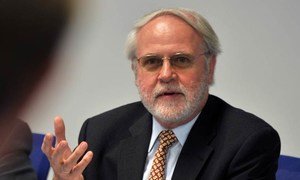 The preliminary findings of a major United Nations assessment into the accident at Japan’s Fukushima Daiichi nuclear power plant last year found that although several workers in the plant had been exposed to radiation, no visible effects have been reported.