23 May 2012
The preliminary findings of a major United Nations assessment into the accident at Japan’s Fukushima Daiichi nuclear power plant last year found that although several workers in the plant had been exposed to radiation, no visible effects have been reported.

“We are drawing on information from as wide a variety of sources as possible – the purpose of which is to identify any discrepancies,” the Chair of the UN Scientific Committee on the Effects of Atomic Radiation (UNSCEAR), Wolfgang Weiss, said in a news release.

In March 2011, the Fukushima Daiichi nuclear power plant was severely damaged during a massive earthquake and tsunami that struck the Japanese coastline. The building housing the plant exploded and three of its nuclear reactors suffered a meltdown in what was reported to be the worst nuclear accident since the 1986 Chernobyl disaster. A year later, a 19-kilometre exclusion zone still surrounds the disaster site.

Two months after the accident, UNSCEAR agreed to carry out a scientific assessment of the level of radiation exposure and health risks resulting from the accident.

As of 31 January, the report found, a total of 20,115 workers had been involved in operations following the accident, and although several workers were irradiated after contamination of their skin, no clinically observable effects have been reported. According to the findings, six workers have died since the accident but none of the deaths were linked to irradiation.

“There is very detailed information so as to assess the public doses but it will be more challenging to validate the workers’ exposure,” Mr. Weiss said, adding, “This is still work in progress, our assessment is being conducted with careful scrutiny to ensure its quality, and we have a long way to go yet.”

According to UNSCEAR, its Committee members now have a good understanding of the nature and composition of the releases into the atmosphere from damaged reactors, and together with measurements of radioactive elements in the air, soil, water and food, the study will be able to assess doses to adults and children in different areas of Japan, considering important organs such as the thyroid.

“We have been given information about measurements made on the thyroids of over 1,000 children in Iitate village, Kawamata town and Iwaki city,” said Mr. Weiss. “Also, a survey in Fukushima prefecture is aiming to evaluate irradiation levels for some two million people living in the prefecture at the time of the accident. The results of the UNSCEAR assessment for these areas will be compared with the Japanese measurements and analysis, and any differences will be highlighted and addressed.”

UNSCEAR, which is holding its annual meeting in Vienna this week, is scheduled to present its final report on the levels and effects of radiation exposure from the accident towards the end of 2013. 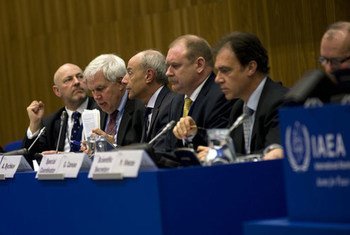 27 March 2012
The United Nations atomic energy agency today delivered its review of Japan’s revised nuclear safety assessment process a year after the country was shaken by one of the world’s worst nuclear accidents at the Fukushima Daiichi power plant.