UNHCR/A. McDonnell
UNHCR’s Representative in Jordan, Andrew Harper shows UK Secretary of State for International Development the system set up to ensure that Syrian refugees are provided with the proper assistance.

10 August 2012
The United Nations refugee agency today said that its offices in Lebanon, Turkey, Jordan and Iraq have reported increases this week in the number of refugees from Syria.

The United Nations refugee agency today said that its offices in Lebanon, Turkey, Jordan and Iraq have reported increases this week in the number of refugees from Syria.

"UNHCR data, which primarily reflects those among the refugee community who have registered or are in the process of being registered, shows a total population of 146,667 people as of August 9,” a spokesperson for the Office of the UN High Commissioner for Refugees (UNHCR), Adrian Edwards, told a media briefing in Geneva.

He added, “In several countries we know there to be substantial refugee populations who have not yet registered.”

According to UNHCR, in Turkey, the refugee population now stands at 50,227 people, with more than 6,000 new arrivals recorded this week alone. Many of these are from Aleppo and surrounding villages, but others are from Idlib and Latakia.

While the main flow is into Turkey, around 8,000 people returned home voluntarily during July mainly to villages in Syria’s Idlib area, UNHCR noted.

On 6 August, the Turkish Government opened a new camp at Akcakale, a district in the country’s south-east. According to the refugee agency, it has also announced its intention to double its overall reception capacity from the current 50,000 people to 100,000 people, with the construction of as many as thirteen additional sites. Currently refugees are hosted in nine camps, with women and children accounting for 72 percent of the population.

In Iraq, there are now 13,587 refugees, with most arrivals this past week in the Kurdistan region.

In the Kurdistan area, one third of the refugees are being housed in a camp at Domiz and others are living with the community, while another camp is being considered near Rabia at Al-Kasis.

A growing number of Iraqis are also returning from Syria, including 2,993 who have come back since the start of August. Since mid-July, 23,228 Iraqis have left Syria to return home.

In Jordan, the number of refugees has reached 45,869 people, with 3,891 of these having arrived so far in August. Of the registered population, most have come from the Dara’a or Homs areas of Syria.

In Lebanon, 36,841 Syrian refugees are now either registered or assisted, but many thousands who have recently arrived in Lebanon are not yet registered with UNHCR. Information campaigns and the dissemination of the refugee agency’s registration hotline continue in border villages to encourage newly arrived families in need of protection or assistance to come forward and register. 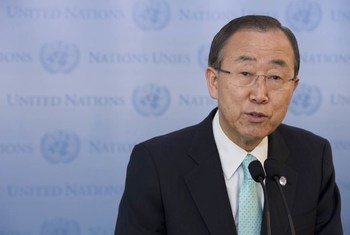 9 August 2012
Warning of the prospect of a long-term civil war in Syria, United Nations Secretary-General Ban Ki-moon today reiterated his call for the international community to work together to resolve the ongoing crisis in the Middle Eastern country.