31 July 2012
At a meeting with the Iraqi Government, the United Nations top official in the Middle Eastern country today urged the authorities to avoid violence in resolving the situation of more than 1,000 Iranian exiles currently located in a camp in Iraq.

“The relocation has come a long way since February and the situation has remained peaceful so far,” the Secretary-General’s Special Representative for Iraq, Martin Kobler, said. “This should not be endangered. The UN went every extra mile and will continue to leave no stone unturned to fulfil this humanitarian mission.”

According to a news release from the UN Assistance Mission in Iraq (UNAMI) – which Mr. Kobler also heads – the envoy urged the Government to refrain from violence under any circumstances, and to be generous when it comes to the humanitarian needs of the residents of Camp New Iraq, formerly known as Camp Ashraf.

The Mission added that over recent days, Mr. Kobler has been engaged in intensive discussions with various interlocutors as part of his efforts to facilitate a peaceful resolution to the issue of the camp’s residents, made up of Iranian exiles, many of them members of a group known as the People’s Mojahedeen of Iran.

In line with a memorandum of understanding signed in December by the UN and the Iraqi Government, some two-thirds of the residents, or nearly 2,000 people, have been re-located to a temporary transit location near Baghdad known as Camp Hurriya, where a process to determine refugee status is being carried out by the Office of the UN High Commissioner for Refugees (UNHCR). Close to 1,300 individuals are still awaiting transfer to the transit centre.

Mr. Kobler urged the residents of Camp New Iraq to begin preparations for the next move to Camp Hurriya without delay, noting that especially vulnerable persons and minors should be included in the next group to be moved out, according to UNAMI.

The envoy also appealed to the residents’ international supporters to live up to their responsibilities, and appealed to Member States to accept the residents for resettlement in their countries.

“The United Nations supports only a peaceful, humanitarian solution to the issue of Camp New Iraq,” UNAMI said in its press release.

UNHCR is currently assessing individual protection needs of former residents of the camp, and those found to be in need of international protection may have the possibility of being resettled to another country.

The refugee agency has also called on countries to cooperate by allowing for re-admission of individuals having had previous links with them, or by offering resettlement places or other forms of humanitarian admission.

In addition, UNHCR has appealed to States for financial support, particularly for the host country to meet costs associated with transferring, hosting, housing, assisting and processing the cases of these individuals. 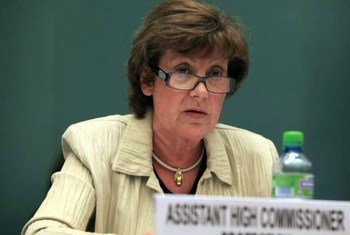 26 July 2012
The United Nations refugee agency today called for cooperation, patience and understanding among all parties involved in finding solutions for the 3,200 Iranian exiles residing in Camp Ashraf in Iraq.