Internally displaced persons (IDPs) in Côte d’Ivoire need durable solutions based on a human rights approach to be able to rebuild their lives, a United Nations independent expert said today.

“The needs of IDPs as well as those of their host or return communities continue to be dire,” the Special Rapporteur on the human rights of internally displaced persons, Chaloka Beyani, said at the end of a nine-day visit to the African country.

“Many IDPs have returned to their areas of origin or have been locally integrated in host communities which are themselves struggling and have few, if any, resources to receive and assist them,” he added.

In late 2010, Côte d’Ivoire was the scene of intense fighting after Alassane Ouattara won a disputed presidential run-off election, leading to months of deadly violence when the runner-up and incumbent, Laurent Gbagbo, refused to step down.

At the height of the post-election crisis in March last year, the number of IDPs in Côte d’Ivoire was estimated at one million. Some IDPs who had been previously displaced during the civil war in 2002 were displaced again in 2011.

Mr. Beyani said that while the Government had made progress towards reestablishing law and order and helping IDPs return to their homes, continued assistance and protection for them was still required, including through livelihood opportunities.

“IDPs have resorted to living in precarious informal urban settlement areas, including in Abidjan, where they may be subject to eviction,” the Special Rapporteur said. “It is critical that they be supported in rebuilding their lives, finding sustainable solutions in their places of return, local integration or resettlement, and participating in the reconciliation process and in other key processes and reforms which will have an impact on their lives and consolidate peace.”

Mr. Beyani said that the Government should adopt a transparent human-rights based approach that takes into account the concerns of the most vulnerable IDPs. Such an approach, he noted, would include assistance to meet the needs of single female households, the elderly and disabled, and separated children.

In addition, he emphasized that the security situation in the country must be improved as many IDPs continue to hide in the forest at night due to fears of attacks. 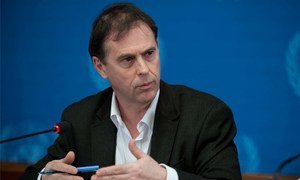 The United Nations human rights agency has condemned the attack that took place on a relocation camp for internally displaced persons (IDPs) in Côte d’Ivoire last week, stressing that the ethnically-motivated incident underscores the need to combat impunity for past abuses.