31 July 2012
The Security Council today extended for another year the mandate of the joint United Nations-African Union peacekeeping force in Darfur, and demanded that all parties to the conflict in the Sudanese region immediately end violence and work towards a comprehensive peace settlement.

By a vote of 14 in favour, with one abstention, the Council also decided that the uniformed personnel serving with the Mission, known by the acronym UNAMID, will be reconfigured “to focus on the areas of Darfur with the highest security threats.”

This is in response to a recommendation by Secretary-General Ban Ki-moon, who wrote in his recent report that “the reconfigured force, although smaller in number, would be better equipped and more rapidly deployable than at present to address emerging threats to civilians.”

The Council also demanded that all parties to the conflict – which has pitted Government forces and allied militiamen against rebel groups since 2003 and led to the displacement of millions of civilians – immediately end violence, attacks on civilians, peacekeepers and humanitarian personnel.

In addition, the 15-member body demanded that all parties to the conflict, including in particular all the non-signatory armed groups, engage immediately and without preconditions to make every effort to reach a permanent ceasefire and a comprehensive peace settlement on the basis of the Doha Document for Peace in Darfur.

The Doha Document is an agreement signed in Qatar last year between the Sudanese Government and the rebel Liberation and Justice Movement, which the UN has said can form the basis for a permanent ceasefire and a comprehensive peace accord to end the fighting in Darfur.

The Council and top officials, including the Joint Special Representative and head of UNAMID, Ibrahim Gambari, have repeatedly called on the armed groups – such as the Sudan Liberation Army-Abdul Wahid faction, the Sudan Liberation Army-Minni Minawi faction, and the Justice and Equality Movement (JEM) – to make every effort to reach a comprehensive peace settlement on the basis of the Doha Document. 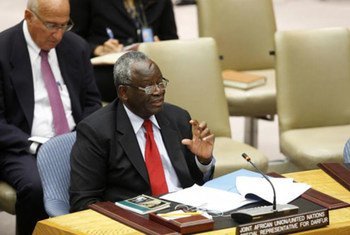 24 July 2012
A sustainable peace for the people of Darfur is in sight but the challenges still facing the Sudanese region are many, the joint African Union-United Nations envoy there said today, stressing the need for all parties to remain focused and committed to making further progress.