18 July 2012
Côte d’Ivoire is making significant advances towards peace, stability and development but will need the continued support of the Security Council as it tackles important challenges, including a volatile security situation and national reconciliation, a top United Nations official said today.

Briefing the Security Council, the Secretary-General’s Special Representative and head of the UN Operation in Côte d’Ivoire (UNOCI), Bert Koenders, said that the country’s economy is recovering, it is progressively reintegrating into the West African region and the overall security situation has improved since the end of the post-electoral crisis last year.

“Yet, this positive picture should not obscure the fact that the country continues to face important challenges and significant threats as it transitions to a peacebuilding phase,” he stated.

“In the last couple of weeks, the country has been characterized by a certain degree of political anxiety, thus showing that the root causes of the conflict – land-related issues, unreformed security forces, impunity, and lack of national reconciliation and political dialogue – need to be tackled urgently and in a transparent manner to the benefit of all Ivorians,” he added.

Mr. Koenders said the security situation remains “particularly volatile,” especially, but not exclusively, in the west, at the Côte d’Ivoire-Liberia border, given the weak State authorities, large number of weapons, armed elements, former combatants, as well as competition over the control of resources.

The situation experienced a dramatic deterioration last month, he noted, when seven UN peacekeepers from Niger lost their lives in an attack by armed elements in the area.

In response to the incidents in the west, UNOCI has boosted its military on the ground by reinforcing troops in the area, and by working closely with the UN Mission in Liberia (UNMIL) to coordinate activities.

The envoy cited the urgent need to tackle the root causes of the conflict and promote reconciliation through concrete measures, while prioritizing the strengthening of the rule of law and the restoration of State authority. “It is important that the Government of Côte d’Ivoire puts increasing emphasis on this burning issue,” he said.

“It is important,” said the envoy, “that the United Nations continues to play its supportive role to assist the Government’s efforts to stabilize the security situation, protect civilians, restore State authority, promote reconciliation, as well as undertake post-conflict development assistance.” 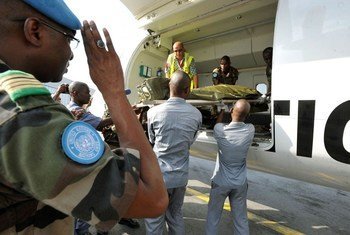 13 June 2012
A United Nations independent human rights expert today urged all Ivorians and the international community to maintain their support for Côte d'Ivoire’s national reconciliation in the aftermath of an attack last week which killed seven UN peacekeepers, eight civilians and one Ivorian soldier.