UN Photo/Patricia Esteve
The bodies of seven slain Nigerien peacekeepers serving with the UN Operation in Côte d'Ivoire, arriving at the airport in Abidjan as they make their way home.

13 June 2012
A United Nations independent human rights expert today urged all Ivorians and the international community to maintain their support for Côte d'Ivoire’s national reconciliation in the aftermath of an attack last week which killed seven UN peacekeepers, eight civilians and one Ivorian soldier.

“This attack, through its magnitude, constitutes a major challenge for the Ivorian people and the international community,” the UN Independent Expert on the human rights situation in Côte d’Ivoire, Doudou Diène, said in a news release.

“The Ivorian people, despite the sense of insecurity created by this attack, should respond by renewing its commitment to national reconciliation, strengthening democratic pluralism, the impartiality of the justice system and the economic and social recovery of the country,” he added.

According to preliminary reports, on Friday, 8 June, peacekeepers serving with the UN Operation in Côte d'Ivoire (UNOCI) were on patrol in the proximity of Para village, near the town of Tai, located in the country's south-west near the Liberian border, when they were attacked by a group of unidentified armed elements.

The peacekeepers were deployed in the area in response to concerns about the safety of local residents.

Mr. Diène noted that the attack has generated thousands of internally displaced persons in Tai and an influx of refugees in UN camps in Liberia.

“The authorities across the border should work together to prevent cross-border raids and attacks on the population as well as to conduct investigations to identify, arrest and prosecute the alleged perpetrators of these acts,” the Independent Expert said.

He also called on the international community to speed up the adjustment of the country’s arms embargo in order to enable the Ivorian Government to respond proportionately to threats to the security of its population, and to ensure that its security forces remain committed to upholding human rights.

With the cooperation of the UN Mission in Liberia (UNMIL), UNOCI has launched an investigation into the circumstances of the attack – the terrain in the area is made up of dense forest, rendering it largely inaccessible from the Liberian side.

UNMIL has previously voiced serious concern about the continued instability in the border areas between Côte d'Ivoire and Liberia. It has enhanced its foot patrols with its Liberian counterparts along the shared border, and has increased its border air patrols.

Earlier this year, Mr. Diène told the UN Human Rights Council that most human rights violations in the country resulted from the difficulty of reforming the security sector and re-establishing the Government’s authority over the country’s entire territory. 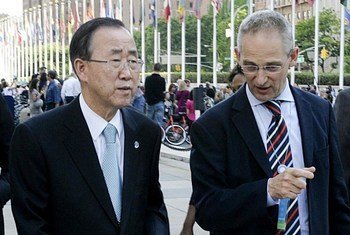 8 June 2012
The United Nations Secretary-General, the President of the General Assembly and the Security Council have condemned “in the strongest possible terms” an attack in Côte d'Ivoire in which seven peacekeepers were killed.