18 July 2012
A United Nations official today condemned the sexual violence in the eastern Democratic Republic of the Congo (DRC) reportedly perpetrated by armed groups, including the group of renegade soldiers known as the M23, and called on authorities to investigate the crimes.

“As violence escalates in the eastern Democratic Republic of the Congo, I am deeply concerned that sexual violence is once again a pattern of the conflict. In the context of illegal activities of armed groups, serious crimes have been reported,” the Acting Special Representative of the Secretary-General on Sexual Violence in Conflict, Vijay Nambiar, said in a statement.

In an incident in the village of Epulu, in Province Orientale, a local militia known as Mai Mai Simba allegedly raped a number of women on 24 June and abducted several others to be used as sex slaves, Mr. Nambiar said, while also noting the reported activities of the M23.

“I condemn the sexual violence reportedly perpetrated by the M23 mutineers and other armed groups and call on the authorities to investigate these crimes promptly and thoroughly so that the perpetrators are held accountable,” Mr. Nambiar said. “All armed groups must lay down their weapons. Any external support provided to the M23 needs to stop.”

The soldiers who make up the M23 mutinied in April, and have since been moving in north-eastern parts of the country, including in the provinces of North Kivu and Province Orientale.

The group is reportedly led by Bosco Ntaganda, an army general wanted by the International Criminal Court (ICC) on charges of war crimes for recruiting and using children in combat in the DRC’s north-east. The Security Council has condemned the M23’s attacks, and demanded that all forms of support to it and other armed groups in the country cease immediately.

In his statement, Mr. Nambiar also commended the efforts of the UN Stabilization Mission in the DRC (MONUSCO), and the Government, to protect civilians, including from sexual violence, under difficult circumstances.

“The situation in terms of sexual violence in the DRC and other areas of concern needs to be continuously monitored and verified,” Mr. Nambiar said.

Peacekeepers serving with MONUSCO have been assisting the DRC Government in protecting civilians displaced or threatened as a result of the violent activities of armed groups.

Earlier this month, an Indian ‘blue helmet’ was killed in a cross-fire amidst clashes between the Congolese national armed forces, known as the FARDC, and M23 fighters in the eastern province of North Kivu. Last week, MONUSCO used two of its attack helicopters to support FARDC efforts to deter M23 members near the villages of Ngugo and Nysisi in the same province.

According to the UN Office for the Coordination of Humanitarian Affairs (OCHA), the fighting between the FARDC and the M23 has displaced more than 220,000 people, including many who have fled to neighbouring Rwanda and Uganda. 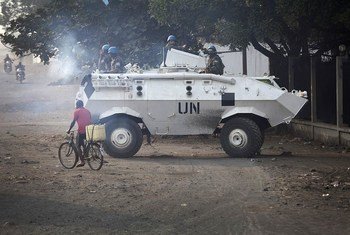 16 July 2012
The Security Council today strongly condemned the attacks in eastern Democratic Republic of the Congo (DRC) by the group of renegade soldiers known as M23, and demanded that all forms of support to armed groups in the country cease immediately.