11 July 2012
In a report to the Security Council on the work of the United Nations Supervision Mission in Syria (UNSMIS), Secretary-General Ban Ki-moon has noted the “valuable role” the Mission can play in the Middle Eastern country, and outlined options for its future orientation.

The Council established UNSMIS – for three months and with up to 300 unarmed military observers – in April to monitor the cessation of violence in Syria, as well as monitor and support the full implementation of a six-point peace plan. The authorized three months end on 20 July, with the Council expected to meet before then to decide on its future.

“UNSMIS can play a valuable role in supporting political dialogue and local confidence-building, establishing facts on the ground and reporting clearly and objectively to the international community,” Mr. Ban states in the report on the implementation of resolution 2043, under which the Council established the Mission.

“Should the violence persist or openings for internal political dialogue develop, I have put forward options for the reorientation of UNSMIS in that context,” he adds.

The six-point plan which UNSMIS was tasked with monitoring was put forward earlier this year by the Joint Special Envoy for the United Nations and the League of Arab States for the Syrian Crisis, Kofi Annan. It calls for an end to violence, access for humanitarian agencies to provide relief to those in need, the release of detainees, the start of inclusive political dialogue, and unrestricted access to the country for the international media.

In mid-June, UNSMIS suspended its monitoring activities due to an escalation of violence

In his report, Mr. Ban notes that the Mission’s withdrawal may need to be considered should political and security conditions render its mandated tasks and fruitful action with all parties untenable. While noting that such a move would eliminate risks to UN staff, the Secretary-General also highlights the potential negative effects.

“Such a decision… would signal a loss of confidence in an early return to a sustainable cessation of violence and remove the sole source of independent monitoring of the implantation of the six-point plan on the ground,” he states. “It would likely precipitate a further blow to efforts to stabilize the situation on the ground and render more difficult the prospect of a negotiated Syrian-led transition as laid out by the Action Group [on Syria].”

At a meeting in Geneva in early July, the UN-backed Action Group on Syria forged an agreement outlining the steps for a peaceful transition in Syria. It called for all parties to immediately re-commit to a sustained cessation of armed violence, to fully cooperate with UNSMIS observers, and to implement Mr. Annan’s six-point peace plan.

Mr. Ban goes on to note in his report two options for bolstering UNSMIS.

“Expanding the number of military observers would increase the scope and scale of observation capacity. A commensurate augmentation of civilian staff to support the larger presence and the mixed military-civilian functions would also be necessary, increasing the size of the Mission footprint throughout the country,” he states, while highlighting that such an expansion would “risk an unacceptably high security exposure without commensurate benefit.”

A second option for bolstering UNSMIS involves deploying a “sizeable armed force-protection element” to provide security for its staff.

“This would enable the Mission to maintain team sites in the field and close contact with local communities, in addition to augmenting national security provision. An armed protection component would also require host country consent and troop contributors willing to perform that role,” Mr. Ban states, adding that “neither of those preconditions appears to be likely.”

Maintaining UNSMIS at its current size and configuration is another option the UN chief outlines in his report. However, that option, while permitting the continuation of efforts on all aspects of the six-point plan, would mean that Mission remains “configured for tasks that it cannot implement.”

“The individual merits of each of the proposals mentioned above appear to be outweighed by the potential negative implications and disincentives foreseen if armed confrontation continues at the current level,” Mr. Ban states. “In this light, a shift in Mission structure and focus could be envisioned.”

In this regard, the Secretary-General says a re-structured UNSMIS could focus on activities within its mandate that can be achieved under the current circumstances and that would build support for the efforts of Mr. Annan.

Such activities include strengthening the capacities for “good offices” to foster dialogue, brokering local-level agreements to calm tensions, promoting ceasefires between the sides, and deepening engagement.

“If UNSMIS were reoriented in this manner, the Mission would redeploy from the field to the capital to minimize risks, retaining core civilian and military observer capacities to focus on the spectrum of initiatives feeding into the political process,” Mr. Ban said, adding that such a presence would expand direct engagement with Syrian authorities and opposition groups, and would be positioned to scale up quickly if necessary to expand on gains in the process.

“A consolidated presence, reoriented to maximize the Mission’s capacities to facilitate political dialogue and diminish exposure to mandate implementation impediments, appears to be preferable in the current conditions and reflects an equally responsive structural and operational flexibility as conditions change,” he adds. 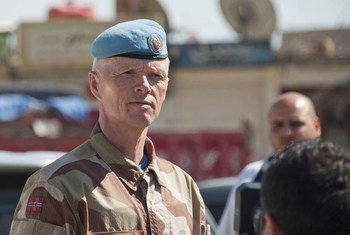