11 July 2012
The World Health Organization (WHO) today committed to a series of actions aimed at improving family planning and reproductive health services in developing countries.

One of the pledges the health agency made at the Family Planning Summit, held in London, in the United Kingdom, was to fast-track its assessment of new and existing contraceptives so that more women in low and middle-income countries can access a broader range of safe and effective contraceptive products.

“Access to modern contraception is a fundamental right of every woman,” WHO’s Director-General, Margaret Chan, said in a news release. “Hand-in-hand with this right is a need to honour the dignity of women by giving them a range of family planning options and the freedom to make their own personal choice.”

Hosted by the UK Government and the Bill & Melinda Gates Foundation, with the UN Population Fund (UNFPA) and other partners, the Summit aims to mobilize global policy, financing, commodity, and service delivery commitments to support the rights of an additional 120 million women and girls in the world's poorest countries to use contraceptive information, services and supplies, without coercion or discrimination, by 2020.

The event coincides with World Population Day, which falls on 11 July. The theme for this year’s Day is ‘Universal Access to Reproductive Health Services,’ aimed at highlighting the essential part that reproductive health plays in creating a just and equitable world.

During the Family Planning Summit, WHO also committed to support countries to integrating their family planning services into basic health care, and to carry out a systematic examination of why so many women are still unable to obtain contraception when they need it.

According to UN data, an estimated 222 million women and girls in developing countries who do not want to get pregnant lack access to contraceptives, information, and services. In many countries, more than 30 per cent of women who want to use contraception are unable to get it.

WHO estimates that maternal deaths could be cut by a third if all women wishing to avoid future pregnancies had access to effective contraception. In particular, unmarried, young, poor, migrant and rural women often have no access to family planning counselling and services.

The health agency identified a set of recommended policy actions so countries can take advantage of the commitments made at the Summit. These include: expanding the range of family planning choices on offer; increasing the number of skilled health workers; making family planning an essential component of health care services; making long-acting and permanent family planning methods such as vasectomy operations available and acceptable; and, eliminating social and non-medial restrictions on the provision of contraceptives to adolescents. 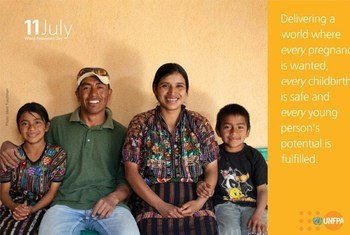 10 July 2012
Marking World Population Day, Secretary-General Ban Ki-moon has called for more to be done to help those who most need access to reproductive health care.