“UNSMIS is not a static mission – it will continually adapt and reconfigure to best serve the needs and aspirations of the Syrian people, and that is what we are doing now,” Major-General Mood told reporters at a press encounter in Damascus.

“We will reinforce our presence into Regional Team Sites to give us, once our operations resume, the flexibility to effectively work on facilitating political dialogue and stability projects,” he added.

UNSMIS will consolidate its eight local team site locations, spread out in different parts of Syria, into the regional locations, with monitors and assets moved from locations in Hama, Idleb and Tartus to boost the Mission’s presence in other locations. Major-General Mood added that the consolidation will not affect the Mission’s current mandate or the number of deployed personnel.

Currently, the monitoring activities of the UN observers remain suspended. The UNSMIS chief had suspended them in mid-June due to an escalation of violence.

“The escalation of violence, allow me to say, to an unprecedented level, obstructed our ability to observe, verify, report as well as assist in local dialogue,” Major-General Mood told the reporters.

The Security Council established UNSMIS – for three months and with up to 300 unarmed military observers – in April to monitor the cessation of violence in Syria, as well as monitor and support the full implementation of a six-point peace plan.

“When the Mission was established in April, we needed to locate in cities to establish and build contacts with the local populations on the ground and to get to know the geography and social fabric of the country,” the Chief Military Observer said. “This was also very useful in monitoring the ceasefire, when it was adhered to, and reporting on violations.”

“Now, we are in a situation in which we have the contacts and knowledge, but we have no ceasefire,” he noted. “So it is time to stop spreading ourselves out too thin and restructure in a way that will allow us, once we resume our activities, to conduct targeted tasks that require longer periods of stay in particular area as well as larger number of observers, specialized in a variety of civilian and military affairs.”

UNSMIS's authorized three months ends on 20 July, with the Council expected to meet before then to decide on its future.

“Whatever decision the Security Council makes, the international community’s continued responsibility to the Syrian people is moral as well as political,” Major-General Mood told the reporters. “We cannot and will not turn our eyes and ears away from your plight and will continue our work to find new paths to political dialogue and peaceful resolution to the crisis.”

The six-point peace plan which UNSMIS was also charged with monitoring, as well as supporting its implementation, was put forward earlier this year by the Joint Special Envoy for the UN and the League of Arab States on Syria, Kofi Annan. It calls for an end to violence that has gripped the Middle Eastern country, access for humanitarian agencies to provide relief to those in need, the release of detainees, the start of inclusive political dialogue, and unrestricted access to the country for the international media. 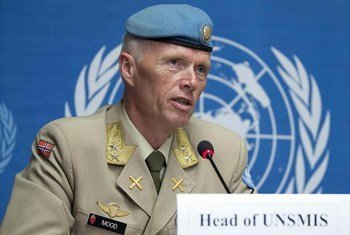 4 July 2012
Addressing reporters in the Syrian capital of Damascus, the UN Chief Military Observer in the country, Major-General Robert Mood, today said the Government had indicated a clear commitment to a peace plan aimed at ending the violence there, and reiterated the commitment of the United Nations to helping the people of Syria.