UNSMIS
In Homs, Syria, smoke drifts into the sky from buildings and houses hit by shelling.

8 July 2012
As the situation in Syria worsens, international pressure is needed on the parties there to prevent a further increase in the violence plaguing the Middle Eastern nation, Secretary-General Ban Ki-moon said today.

“The situation has deteriorated significantly, and has become more militarized. Appalling violations of human rights continue to take place. The killings and violence seem to have taken on a very worrying sectarian character. At least 1.5 million people are now in need of urgent humanitarian aid,” Mr. Ban told journalists at the Japan National Press Club.

“It is crucial for the Security Council and the Action Group to pressure the parties to prevent any further escalation of the conflict and advance the prospects of a political transition,” he added.

At its first meeting, held recently in Geneva, Switzerland, the Action Group on Syria forged an agreement outlining the steps for a peaceful transition in Syria, which included the establishment of a transitional governing body that would exercise full executive powers and that would be made up by members of the present Government and the opposition and other groups.

It also called for all parties to immediately re-commit to a sustained cessation of armed violence, to fully cooperate with observers serving with the UN Supervision Mission in Syria (UNSMIS), and to implement the six-point peace plan put forward earlier this year by the Joint Special Envoy for the UN and the League of Arab States on Syria, Kofi Annan.

“The Government of Syria and all parties on the ground must recommit to the six-point plan in its entirety,” Mr. Ban said. “Should the parties continue to flout Security Council resolutions, the Council will have to take the necessary collective action.”

Mr. Annan's six-point peace plan calls for an end to violence, access for humanitarian agencies to provide relief to those in need, the release of detainees, the start of inclusive political dialogue, and unrestricted access to the country for the international media. In a statement issued separately today, Mr. Annan's spokesperson said that the Joint Special Envoy had arrived in Damascus on Sunday evening for talks with President Bashar Al-Assad.

In his remarks to the Japan National Press Club, Secretary-General Ban also said UNSMIS was playing an “invaluable role” in reporting objectively on events on the ground, until it was compelled to suspend its operational activities. The head of UNSMIS, Major-General Robert Mood, had suspended his observers' patrols in mid-June due to an escalation of violence.

The Security Council established the Mission – for three months and with up to 300 unarmed military observers – in April to monitor the cessation of violence in Syria, as well as monitor and support the full implementation of the six-point peace plan. Its authorized three months ends on 20 July, with the Council expected to meet before then to decide on its future.

“I have just reported to the Security Council on the Mission's posture and role, and I encourage the Council to maintain a Mission presence capable of adapting to opportunities that may arise should the parties move towards a political solution,” Mr. Ban said.

He added that the Syrian people and the region cannot afford more atrocities, suffering and chaos. “President Assad must understand that things cannot continue as they are. Fundamental change is needed,” he said.

In an open letter to the people of Syria today, Major-General Mood reiterated that UNSMIS is not a static Mission.

“It will continually adapt and reconfigure to best serve the needs and aspirations of the Syrian people,” he said, noting that the Security Council will make an assessment as to the future of the mission in the next days or weeks, and that that assessment will be based on subsequent developments in Syria and the response to the results of the Action Group's recent meeting.

“Whatever the decision maybe, the international community's continued responsibility to Syria is a moral and political obligation,” the UNSMIS chief said in the letter. “We cannot and will not turn our eyes and ears away from your plight and will continue to work together, with you, to find new paths to political dialogue and peaceful resolution to the crisis.”

Last week, Major-General Mood announced that UNSMIS would restructure itself. Its eight local team site locations, spread out in different parts of Syria, would be reconfigured into regional locations.

The UN estimates that more than 10,000 people, mostly civilians, have been killed in Syria and tens of thousands displaced since the uprising against President al-Assad began 16 months ago. 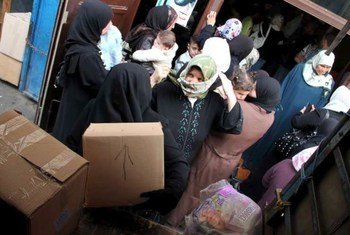 6 July 2012
Noting gross violations of human rights and the ongoing violence there, the United Nations Human Rights Council today condemned the situation in Syria, and urged authorities to immediately implement a peace plan and grant unimpeded access to assistance organizations.