UNICEF warns of increasing violence against children in northern Mali

OCHA/Nicole Lawrence
Armed conflict in northern Mali has forced thousands to flee their homes and seek refuge in neighbouring countries such as Niger.
6 July 2012

In a news release, the agency reported that since the end of March at least 175 boys have been recruited into armed groups, at least eight girls have been sexually abused, two boys have been killed by explosive devices in separate incidents and 18 more have been injured.

“These numbers are reason for alarm especially because they represent only a partial picture of the child protection context in the north – an area where access for humanitarian workers is limited,” said UNICEF’s Representative in Mali, Theophane Nikyema. “Children in the north are witnessing or becoming victims of violence and they must be protected.”

Fighting resumed in northern Mali between Government forces and Tuareg rebels in January this year. The instability and insecurity resulting from the renewed clashes, as well as the proliferation of armed groups in the region, and a crisis due to a coup d'état in March, have uprooted nearly 320,000 people, with many of them fleeing to neighbouring countries.

On the humanitarian front, the western part of Africa’s Sahel region – which includes Mali – has deteriorated dramatically through 2012 owing to drought and sporadic rains, poor harvest, rising food prices, displacement and insecurity. The United Nations and its partners have appealed for $1.6 billion to provide vital humanitarian aid to people in the crisis-stricken region.

In its release, UNICEF noted that the closure of the vast majority of schools across the region isa further cause for concern, with children being at higher risk of recruitment, violence and exploitation. Currently, school closures are affecting some 300,000 children in basic education alone.

UNICEF is working with local partners in the conflict-affected regions of Kidal, Gao and Timbuktu, as well as the border region of Mopti, to strengthen communities’ ability to identify and support separated children, raise public awareness about risks for children, including recruitment into armed groups, and promoting education.

UNICEF stressed that funding for its activities is critical, as just 21 per cent of the agency’s $58 million appeal for Mali for this year has been met, and just 10 per cent of the child protection target has been reached.

In addition to child protection, UNICEF is concerned about the severe nutritional crisis across the Sahel region, where some 560,000 children are at risk of acute malnutrition this year, including 220,000 that require life-saving treatment.

While the majority of the malnourished children in Mali live in the country’s south, conditions in the north have sharply reduced access for families to food, water and basic health care. UNICEF has provided emergency health, nutrition, water, sanitation and hygiene and household supplies to partners working in Gao, Timbuktu and Kidal, and is reaching children with vaccinations, nutritional supplements and deworming medication wherever possible.

More than 70,000 children have been treated for acute malnutrition since the beginning of the year, and in the past week UNICEF and partners supported the national health authorities in reaching almost six million children with polio vaccinations, vitamin A supplements and de-worming medication. 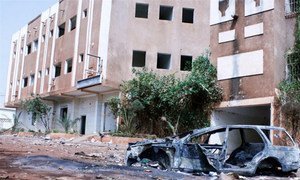 Condemning the forcible seizure of power in Mali earlier this year, the United Nations Security Council today demanded the immediate and unconditional cessation of hostilities by rebel groups in the country’s north and indicated its willingness to consider the deployment of a stabilization force in the troubled West African country.