2 July 2012
A United Nations independent expert today called on Turkey and the European Union (EU) to make the human rights of migrants a priority in their cooperation managing immigrants between territories.

“While the EU and Turkey have developed close cooperation on migration issues, which has led to some notable positive developments, the assistance offered to Turkey regarding migration management appears to focus largely on securitising the borders and decreasing irregular migration to the European common territory through focusing on the detention and removal of migrants in Turkey,” said the Special Rapporteur on the human rights of migrants, François Crépeau, in a news release.

“Often neglected from this equation is an equivalent emphasis on the human rights of those most vulnerable and most affected by the migration process: the migrants themselves,” he added.

Mr. Crépeau, who just finished a five-day official visit to Turkey, noted that detention of migrants remains an issue of concern in the country, and that the Greek-Turkish border point remains one of the key passages of irregular migration in Europe.

“Despite the fact that Turkey is at the geostrategic juncture between Europe and Asia, the pressures on Turkish authorities to control irregular migration should not trump the human rights of migrants,” Mr. Crépeau said, noting that the EU’s focus on heightening border security has led to an increase in detention as a solution strategy for migration control, with more funding for new detention centres.

“The lack of safeguards for detainees in these centres is notable, and I insist that all centres of detention uphold human rights standards and organisations be provided full and free access to monitor them appropriately,” Mr. Crépeau said.

“I am further troubled about the detention of some vulnerable migrants in an irregular situation, including families and children,” he added, emphasizing that “alternatives to detention must always be explored.”

Mr. Crépeau’s visit to Turkey was the third stage of a special study on the management of the EU’s external borders. He visited Brussels in May, and Tunisia earlier in June. Later in the year he will visit the two main entry points into the EU, Greece and Italy. The Special Rapporteur will present a report on his findings to the UN Human Rights Council in June next year. 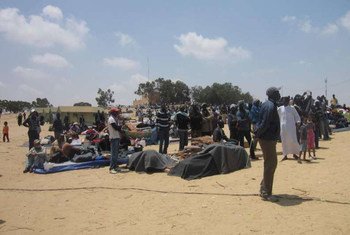 12 June 2012
A United Nations independent human rights expert called today on the European Union (EU) to develop a migration mechanism currently being negotiated with Tunisia by concentrating on the respect, protection and promotion of the human rights of migrants.