2 July 2012
The United Nations Economic and Social Council (ECOSOC) today opened its high-level meeting in New York with a focus on the global jobs crisis and the search for ways to stimulate the creation of decent and sustainable employment.

“While failure to manage global job creation and sustain growth inflicts tremendous damage everywhere, it is the world’s poorest who suffer the most, with women and youth typically the greatest victims,” Mr. Koterec added.

A founding UN Charter body, ECOSOC is the venue where issues concerning the world’s economic, social and environmental challenges are discussed and debated, and policy recommendations made. More than 500 delegates, including government ministers and heads of civil society groups, international institutions and the private sector, are attending the Council’s high-level segment, which will focus on boosting productive capacity, strengthening development cooperation and creating decent, sustainable work.

In his remarks, Mr. Koterec emphasized that ECOSOC is scaling up its efforts to tackle youth unemployment and the creation of jobs that provide adequate conditions and social protection for workers, linking job creation with sustainable development.

“An effective post-2015 development agenda must be based upon streamlined development cooperation: targeted and improved financing, transparency, accountability, and much more,” Mr. Koterec said.

Addressing the opening of the high-level segment, Secretary-General Ban Ki-moon emphasized that getting the global economy back on track will require decisive action, and underlined the need to pursue a “new model of growth within the framework of sustainable development and enhanced international cooperation.”

The UN chief highlighted that the creation of decent jobs had been a priority during the UN Conference on Sustainable Development (Rio+20) last month in Rio de Janeiro, Brazil, with countries voicing their concern for adequate working conditions and incomes for city dwellers as well as small farmers.

“Only by generating decent – and decently paid – employment can we help the poor and vulnerable to escape poverty traps and build resilience,” Mr. Ban said.

He also noted that this year’s report on the Millennium Development Goals (MDGs), which was launched today, points to significant but uneven progress among and within countries, and more needs to be done to reduce poverty and hunger worldwide. The MDG’s are a set of global anti-poverty targets which world leaders have pledged to achieve by 2015.

“The MDGs have given policy-makers a unifying framework for global development, a clear agenda with measurable goals and targets, and a common, inspiring vision. As we look beyond 2015 we must do the same,” Mr. Ban said.

In his remarks to the opening of the high-session segment, the President of the General Assembly, Abdulaziz Al-Nasser, urged ECOSOC and General Assembly members to collaborate closely to tackle the world’s pressing economic and financial issues, and find ways to promote inclusive, sustainable and equitable economic growth and employment.

Mr. Al-Nasser stressed that the high-level meeting should send out a message about “our commitment to the creation of quality jobs and decent work, productivity development, and the strengthening of international coordination and cooperation, plus well-managed environment.” 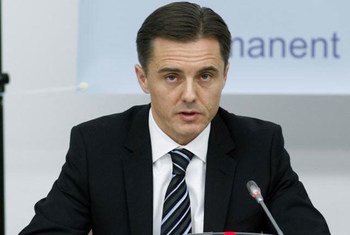