UN Photo/JC McIlwaine
General Assembly President Nassir Abdulaziz Al-Nasser addresses the Informal Thematic Debate of the General Assembly on “The Road to Rio+20 and beyond.”

22 May 2012
United Nations top officials today stressed the need to achieve concrete commitments ahead of the Sustainable Development Conference (Rio+20) in Brazil, and called on countries to make progress in the last round of negotiations before the Conference starts next month.

“I encourage Member States to end the negotiations in a timely manner, in order that Heads of State and Government will come to Rio prepared and ready to sign up to a forward-looking, action-oriented document,” the President of the General Assembly, Abdulaziz Al-Nasser, said in his remarks to the Assembly’s thematic debate on The Road to Rio+20 and Beyond. “There are still some crucial decisions to be made.”

Next week, delegations from all over the world will gather again in New York for an additional five days of deliberations on the outcome document for Rio+20. The extra days were added earlier this month so that countries can bridge the differences that have kept them from making further progress in negotiations.

Mr. Al-Nasser praised the collective efforts of delegations that are working towards consensus, but warned that much more still needs to be done. In particular, he noted that today’s debate should help shed light on the creation of Sustainable Development Goals (SDGs) and an institutional framework for sustainable development.

“On the issue of the Sustainable Development Goals, many country and stakeholders are looking to Rio for a concrete outcome, including priority areas,” Mr. Al-Nasser said, adding that the conference can make a significant contribution to the development agenda after 2015, without distracting attention from the Millennium Development Goals (MDGs), the anti-poverty and social development targets that have an achievement deadline of 2015.

In his remarks to the Assembly’s debate, Secretary-General Ban Ki-moon drew attention to the need for progress in negotiations.

“The world is watching. The media are focused. People – young and old – are demanding action,” Mr. Ban said. “Yet the current pace of negotiations is sending all the wrong signals. We cannot let a microscopic examination of text blind us to the big picture, we do not have a moment to waste.”

He noted that UN Member States have the opportunity to forge agreements on many thematic issues, including: decent jobs, food security and sustainable agriculture, efficient and cleaner energy sources, access to safe drinking water and sanitation, conservation of the world’s oceans, strengthened institutions to support sustainable development, and progress in defining SDGs that build on the MDGs.

“Leaders should agree in Rio that Sustainable Development Goals with clear and measurable targets and indicators will be a central part of the post-2015 global development framework,” Mr. Ban said. “SDGs would give concrete expression to renewed high-level political commitment for sustainable development.” 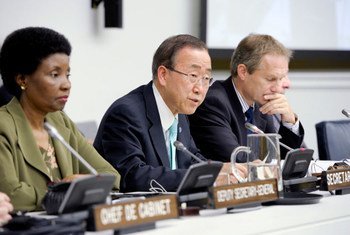 9 May 2012
Secretary-General Ban Ki-moon today urged countries to make progress in their negotiations of the outcome document for the United Nations Sustainable Development Conference (Rio+20) next month.