UN Photo/Jean-Marc Ferré
Joint Special Envoy of the United Nations and the League of Arab States on the Syrian Crisis, Kofi Annan.

28 May 2012
The Joint Special Envoy of the United Nations and the League of Arab States arrived in the Syrian capital on Monday at what he called a “critical” moment in the crisis, just days after the massacre of men, women and children that has sparked widespread condemnation.

The visit by Kofi Annan to Damascus comes on the heels of the killings of over 100 civilians, including over 30 children under the age of 10, in the village of Houla two days ago. Observers from the UN Supervision Mission in Syria (UNSMIS) who visited the area on Saturday confirmed the deaths, as well as the use of heavy weaponry in the residential neighbourhood.

“I have come to Syria at a critical moment in this crisis,” Mr. Annan said in a statement issued to the press on his arrival, adding that he is “shocked and horrified” by the tragic incident in Houla.

“This was an appalling crime, and the Security Council has rightly condemned it,” he stated, referring to the Council's action following an emergency session yesterday. The killings have also been strongly condemned by Secretary-General Ban Ki-moon, the head of UNSMIS, General Robert Mood, and a host of UN officials.

“I urge the Government to take bold steps to signal that it is serious in its intention to resolve this crisis peacefully, and for everyone involved to help create the right context for a credible political process,” said Mr. Annan, who intends to have “serious and frank” discussions with Mr. al-Assad and a range of other actors while in Syria.

“And this message of peace is not only for the Government, but for everyone with a gun,” he added.

The envoy also stressed the need to implement the six-point plan that he put forward a few months ago, which calls for an end to violence, access for humanitarian agencies to provide relief to those in need, the release of detainees, the start of inclusive political dialogue that takes into account the aspirations of the Syrian people, and unrestricted access to the country for the international media.

The Secretary-General's Special Representative for Children and Armed Conflict, Radhika Coomaraswamy, today condemned the killing of children in Houla, and called on the Syrian authorities to promptly investigate the circumstances that led to the killings.

In addition, UN High Commissioner for Human Rights Navi Pillay has said that the “indiscriminate and possibly deliberate” killing of the villagers may mount to crimes against humanity or other forms of international crime and require an immediate probe by an independent body.

“The UN has so far directly verified the deaths of at least 90 people, including 34 children under the age of 10, while other unconfirmed reports suggest the death toll may well be much higher. These atrocities may amount to crimes against humanity or other forms of international crime or violations of international law,” she stated in a news release.

“There should be an immediate and unfettered investigation of the incident by an independent and impartial international body,” Ms. Pillay added. “The Syrian government has a legal and moral responsibility to fully assist such an investigation, and to take concrete steps to prevent any similar acts.”

The High Commissioner also noted that other States have a duty to do all they can to prevent and prosecute the perpetrators of international crimes, and once again urged the Security Council, as a matter of urgency, to consider referring the case of Syria to the International Criminal Court. 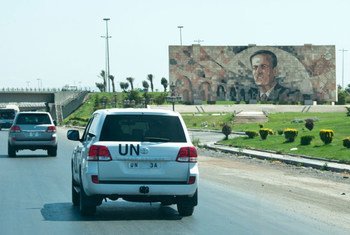 27 May 2012
The Security Council, meeting in an emergency session on Sunday, added its voice to the condemnation by United Nations officials of the recent massacre of men, women and children in the Syrian village of Houla.