UNSMIS
A convoy of UN observers travels in Syria.

27 May 2012
The Security Council, meeting in an emergency session on Sunday, added its voice to the condemnation by United Nations officials of the recent massacre of men, women and children in the Syrian village of Houla.

The Council was briefed in a closed-door session by Under-Secretary-General for Peacekeeping Operations Hervé Ladsous as well as by video-link by General Robert Mood, head of the UN Supervision Mission in Syria (UNSMIS), on the killings that took place on 25 May and in the early hours of 26 May of a reported 108 civilians, including over 30 children.

On Saturday UN observers went to Houla, a village near Homs, and confirmed the killings as well as the wounding of hundreds of civilians. They also confirmed from an examination of ordnance that artillery and tank shells were fired in the area.

In a letter sent to the Council, Secretary-General Ban Ki-moon stated that, “while the detailed circumstances are unknown, we can confirm that there has been artillery and mortar shelling. There have also been other forms of violence, including shootings at close range and severe physical abuse.”

The Council, in a statement to the press, condemned the killings “in the strongest possible terms” as well as the killing of civilians by shooting at close range and by severe physical abuse.

Yesterday Mr. Ban, Gen. Mood and the Joint Special Envoy of the UN and the League of Arab States for Syria, Kofi Annan, issued statements in which they strongly condemned the killings and urged that those responsible be held to account.

The killings have also sparked outrage from the President of the General Assembly, Nassir Abdulaziz Al-Nasser, who said in a statement that these “shocking” killings in a populated neighborhood are a flagrant violation of international law and the commitments made by the Syrian Government, and from the UN Children's Fund (UNICEF).

“This outrageous crime against such young children who have no part in these battles points to a new urgency in finding solutions to the Syrian conflict. Such a massacre cannot go unpunished,” said Sarah Crowe, spokesperson for the Executive Director of UNICEF. 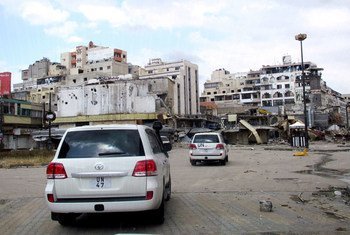 26 May 2012
Top United Nations officials on Saturday strongly condemned the killing of over 90 civilians, including 32 children, and the wounding of hundreds more in a village near Homs, and stressed that those responsible must be held accountable.