15 May 2012
The President of the General Assembly today called on Member States to advance the work of the United Nations Conference on Disarmament (CD), stressing the need for greater efforts and flexibility to overcome the deadlock that has plagued the body for some time now.

“Indeed, the failure of the CD in making substantive progress for well over a decade has undoubtedly put the credibility of this crucially important body at a high risk,” Nassir Abdulaziz Al-Nasser said in his remarks to the opening of the second part of the Conference’s 2012 session in Geneva.

Established in 1979 and with a current membership of 65 countries, the CD primarily focuses on cessation of the nuclear arms race and nuclear disarmament, prevention of nuclear war, and prevention of an arms race in outer space, among other issues. It has been plagued in recent years by an inability to overcome differences among its members and start its substantive work towards advancing disarmament goals.

Over its history, the CD has produced landmark disarmament instruments such as the Treaty on the Non-Proliferation of Nuclear Weapons (NPT), the Chemical Weapons Convention and the Comprehensive Nuclear-Test-Ban Treaty (CTBT).

Mr. Al-Nasser noted that in resolutions adopted over the past couple of years, the Assembly has recognized that the political will to advance the disarmament agenda has been strengthened in recent years.

“Yet, it has expressed grave concern about the current status of the disarmament machinery, including the lack of progress in the Conference on Disarmament, and stressed the need for greater efforts to advance multilateral disarmament negotiations,” he said.

The Assembly President cited important progress made in the last two years on bilateral, regional and multilateral levels, including the treaty concluded by the United States and Russia on the reduction and limitation of strategic offensive arms.

“These developments demonstrate progress and make a positive impact on the global security environment,” he said. “But it seems that this progress has been achieved in disconnect from the work done in the Conference on Disarmament.”

Mr. Al-Nasser warned that the continuation of the current deadlock has – and could very well continue to have – “worrying implications on the role, function and even the very future of the CD.

“The only way to avoid this is for the Conference to promptly take up its responsibility at this session through collective action. The future of the Conference on Disarmament is in its Member States’ hands,” he said.

Noting that the Conference already adopted a programme of work by consensus in 2009, Mr. Al-Nasser invited delegations to use that programme as “a least common denominator” for negotiations aimed at adopting a 2012 programme of work without delay.

“A number of very constructive proposals have been put forward and delegations should allow the President of the Conference to lead this effort in serious and inclusive consultations over a draft programme that is consensual, realistic and not necessarily ideal,” he said.

“The perfect has been the enemy of the good for too long,” he added. “Overcoming this obstacle in the CD will represent a very positive sign in putting the disarmament machinery back on track and bringing nuclear disarmament back on its agenda.”

General Assembly President pays tribute to those who rebelled against slavery 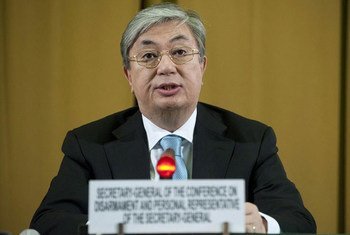