Yukio Takasu of Japan, who is currently serving as the Secretary-General’s Special Advisor on Human Security, has been selected as Under-Secretary-General for Management.

Mr. Takasu has nearly 40 years of multilateral diplomacy and brings to the position a wide range of experience working with the UN as Controller and Member of the Advisory Committee on Administrative and Budgetary Questions, including expertise in accountability, transparency, efficient use of resources and coherence, according to Mr. Ban’s office.

Ms. Haq is currently serving as Special Representative of the Secretary-General and head of the UN Integrated Mission in Timor-Leste (UNMIT).

With nearly 40 years of UN service, including in the UN missions in Sudan and Afghanistan, Ms. Haq brings to the position extensive management and operational experience, supporting complex mission deployments and transition activities, including crisis management, Mr. Ban’s office said.

In addition, it was announced that David Muchoki Kanja of Kenya has been selected for the newly created position of Assistant Secretary-General for the Office of Internal Oversight Services (OIOS).

Mr. Kanja, who is currently serving as the Director of the UN Children’s Fund (UNICEF) Office of Internal Audit, brings 27 years of oversight experience to his new post.

Today’s announcements are part of an ongoing process initiated by Mr. Ban prior to beginning his second five-year term at the helm of the UN in January, to try to balance the need for fresh perspectives with the need for maintaining continuity of purpose.

Additional appointments are expected in the coming weeks on other senior positions as the relevant selection processes are completed.

♦ Receive daily updates directly in your inbox - Subscribe here to a topic.
♦ Download the UN News app for your iOS or Android devices.
appointment 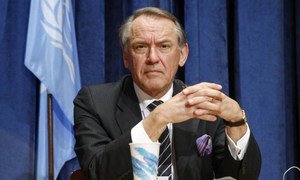