At the national level, he has served in key ambassadorial positions representing his country in New York and Washington, as well as State Secretary for Foreign Affairs and Foreign Minister of Sweden.

Speaking to reporters at UN Headquarters, Mr. Ban also announced that Susana Malcorra of Argentina, who has served as Under-Secretary-General for Field Support since 2008, will be his new Chief of Staff as of 1 April.

In her current position, Ms. Malcorra directs logistical and administrative support for UN peace missions worldwide in support of about 30 field operations comprising 120,000 military, police and civilian personnel. She will succeed Vijay Nambiar of India, who will carry on at the UN as the Secretary-General’s Special Adviser for Myanmar.

Mr. Ban said that “transparent and competitive” selection processes for 10 Under-Secretaries-General have started.

“Some of them reached a final stage. It is my intention to finalize them as promptly as the selection process is completed. I will be able to make additional announcements some time next week,” he stated.

It was also announced that Robert Orr and Kim Won-soo of the Executive Office of the Secretary-General will move on to new functions. Mr. Orr will lead the effort to create a new partnership facility as a way to harness public and private partnerships to meet global challenges.

Mr. Kim will lead a change implementation team seeking to create a network for reform, which will enable the Organization to have a modern Secretariat, supported by a mobile and multi-skilled work force. Both men will take up their new functions on 1 April.

Prior to beginning his second five-year term at the helm of the Organization in January, Mr. Ban said that he is undertaking a thorough review of his entire team. He added that he is focusing on those senior officials who already have five years of service, as well as trying to balance the need for fresh perspectives with the need for maintaining continuity of purpose. 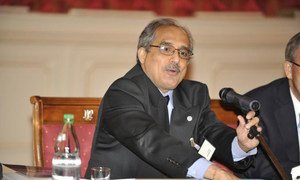 Secretary-General Ban Ki-moon plans to roll out changes in his senior team as he prepares to embark on his second term at the helm of the United Nations, including to his top political, economic, disarmament, and communications advisers, his chief of staff announced today.