24 April 2012
Following a briefing on the situation on the border between Sudan and South Sudan, members of the Security Council today urged an immediate ceasefire and a return to negotiations for the two countries.

Addressing the press, Ambassador Susan Rice of the United States, which holds the Council’s presidency this month, said Council members had been briefed on the deteriorating situation between the two countries by the head of UN peacekeeping operations, Hervé Ladsous; the Secretary-General’s Special Envoy for Sudan and South Sudan, Haile Menkerios; and the Secretary-General’s Special Representative and head of the UN Mission in South Sudan (UNMISS), Hilde Johnson.

The UNMISS chief confirmed that at least 16 civilians have been killed and 34 injured in Unity state, in South Sudan, as a result of aerial bombardments by Sudan, Amb. Rice said.

“Council members welcomed the withdrawal of the SPLA [Sudan People’s Liberation Army] from Heglig, demanded an immediate halt to aerial bombardment by the Sudanese Armed Forces and urged an immediate ceasefire and a return to negotiating table,” Amb. Rice told the press.

She added that Council members had voiced concern over damage to Heglig’s oil infrastructure, and welcomed an African Union Peace and Security Council communiqué on the matter, adopted today, which “will inform our consultations on further action.”

Ms. Rice said that several Council members noted the importance of Sudan and the Sudan People’s Liberation Movement-North (SPLM-North) engaging in a political solution to the problems in Southern Kordofan and Blue Nile states, as well as the need for urgent humanitarian assistance there.

The two Sudanese states, which lie on the border between the two countries, have been beset by fighting between Sudanese forces and the SPLM-N since last year. The SPLM-N was previously part of the rebel movement that fought for the independence of South Sudan.

Earlier Tuesday, the UN refugee agency said that some 35,000 people have been displaced by the recent fighting near the border between Sudan and South Sudan, and new outbreaks of violence are putting refugees’ safety at risk.

Addressing the media in Geneva, a spokesperson for the Office of the UN High Commissioner for Refugees (UNHCR), Adrian Edwards, said that people in border areas such as Heglig, Talodi and other parts of the state of South Kordofan, had been displaced by the fighting, and noted that escalating hostilities are raising concerns about refugees’ safety.

Senior UN officials have consistently called for a halt in hostilities to ensure civilian safety.

Mr. Edwards said UNHCR had registered an increase in the number of Sudanese refugees crossing the border, some of them “seriously malnourished.” In Yida, for example, more than 1,300 new arrivals were reported in the last four days, and average daily arrivals have tripled since February and March.

UNHCR has appealed to both governments to “do their utmost to avoid displaced civilians being placed in harm’s way, and to avoid actions that could displace more people,” Mr. Edwards said, adding that humanitarian agencies will continue to provide life-saving assistance to over 20,000 refugees in the region.

At the same press conference in Geneva, a spokesperson for the World Food Programme (WFP), Elizabeth Byrs, said that the food agency aims to distribute assistance to 2.7 million people facing food insecurity in South Sudan this year.

Ms. Byrs said the agency was focusing on prepositioning food in the country now that the rainy season had started, as many parts of the country will become increasingly inaccessible, and noted that the unstable security situation was affecting operations.

Meanwhile, the Secretary-General’s Special Representative for Children and Armed Conflict, Radhika Coomaraswamy, today expressed her deep concern for the heavy toll that the clashes are having on children.

Ms. Coomaraswamy called on the Sudanese Armed Forces to immediately stop the indiscriminate attacks. “Sudan and South Sudan should both refrain from further confrontation in an effort to spare innocent civilians from further suffering,” she added. 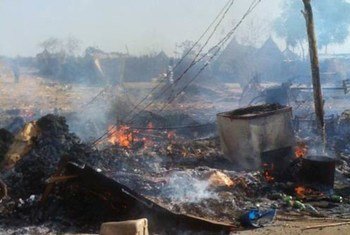 23 April 2012
United Nations senior officials today deplored the continued aerial bombardments in Bentiu town in South Sudan’s Unity state, and called on the country and its neighbour, Sudan, to take all measures to ensure the safety of civilians.