WFP
A Syrian refugee from the Al-Shaddadi area of Jordan.

24 April 2012
The United Nations food agency today announced it is stepping up its assistance to reach, by the end of the month, a quarter of a million Syrians who have been affected by unrest in the Middle Eastern country, adding that it plans to double this amount in the coming weeks.

“As the conflict continues, Syrians in areas affected by the violence are struggling to feed their families and WFP is deeply concerned about the potential for food insecurity,” the Executive Director of the World Food Programme (WFP), Ertharin Cousin, said in a press release. “The expansion of our assistance came at the request of the Syrian Arab Red Crescent, and we are ready to further scale up our humanitarian assistance when access permits.”

Last month, a government-led assessment mission, jointly carried out by seven UN agencies and the Organization of Islamic Cooperation, estimated that as many as one million Syrians were in need of humanitarian assistance.

Working in partnership with the Syrian Arab Red Crescent, WFP has been providing food aid for up to 100,000 people each month in cities such as Homs, Hama, Idleb and Damascus.

“We will also be providing capacity-building activities to Red Crescent employees and volunteers to support their efforts and enhance their distribution capacity,” said WFP’s Regional Director for the Middle East and North Africa, Daly Belgasmi.

This week, WFP also began distributing hot meals to Syrian refugees living in the neighbouring country of Jordan, providing food packages to 15,000 people, in cooperation with the Jordanian Hashemite Charity Society and the Jordanian Red Crescent.

According to WFP, even before violence broke out in Syria, a food security survey found that 1.4 million people – especially those from areas hit hard by a drought in previous years – were struggling to feed themselves and that they were concentrated in areas that are currently affected by unrest.

WFP’s emergency operation for Syria was launched in August with a budget currently estimated at $37.4 million. The agency is still seeking funding, as less than half that amount has been secured.

On Friday, the UN High Commissioner for Refugees (UNHCR) said that one month after the UN issued an appeal for $84 million to help Syrian refugees in Jordan, Lebanon, Turkey and Iraq, only 20 per cent of the funds had been received. 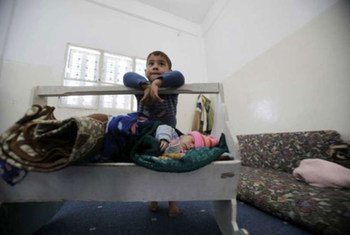 29 March 2012
At least one million Syrians are in need of humanitarian assistance, according to the findings of a government-led assessment mission jointly carried out with the United Nations and the Organization of Islamic Cooperation (OIC), and released today.