28 March 2012
The United Nations has teamed up with the New Partnership for Africa’s Development (NEPAD) Agency to advance sustainable responses to HIV/AIDS, health and development across the continent.

Under a new agreement signed yesterday, the Joint UN Programme on HIV/AIDS (UNAIDS) and the Agency will work with partners to support the development of common African positions for the AIDS response, with an emphasis on sustainable financing.

“This new partnership will bring us one step closer to our goal of zero new HIV infections, zero discrimination and zero AIDS-related deaths,” UNAIDS’ Executive Director, Michel Sidibé, told reporters in the Ethiopian capital, Addis Ababa, after the signing. UNAIDS is charged with coordinating efforts to unite the world against AIDS; globally, it sets policy and is the source of HIV-related data.

UNAIDS and NEPAD will work together to address constraints in access to HIV medicines, facilitate policies and partnerships to eliminate new HIV infections in children and improve the health of mothers, enhance country ownership and accountability, and encourage South-South cooperation.

In his remarks, Mr. Sidibé added that “getting to zero” would demand effective and inclusive partnerships, shared responsibility, greater transparency and a focus on results – areas in which NEPAD is known to excel.

The Chief Executive Officer of NEPAD Agency, Ibrahim Mayaki, said that country ownership would be critical to advancing AIDS and development responses in the coming decade.

“Partnerships for development can only succeed if they are led by developing countries,” he said. “AIDS programmes must be financially sustainable over the long term and tailored to specific national settings.”

Currently, about two-thirds of all AIDS investments in Africa come from external sources. The continent will require between $11 billion - $12 billion for its regional AIDS response by 2015 – $3 billion - $4 billion more than the current expenditure. 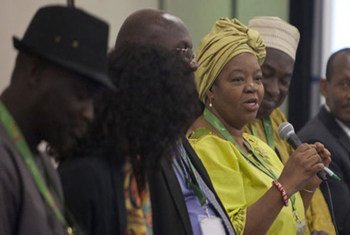 19 January 2012
Eastern and Southern Africa, the region most affected by the HIV/AIDS epidemic, is making great strides to scale up access to prevention and treatment services, a United Nations official said today, adding that focus is on behavioural change and prevention of mother-to-child transmission.