28 March 2012
The United Nations human rights chief today congratulated Senegal for conducting peaceful, free, fair and transparent elections, and called on other West African countries, where there has been increasing political tension and violence, to do the same.

“At a time of uncertainty and election-related violence in other parts of West Africa, it is heartening that the Senegalese people, members of political parties, civil society and other stakeholders have pulled together to uphold the country’s tradition of peaceful, democratic transitions of power,” the UN High Commissioner for Human Rights, Navi Pillay, said.

Her comments follow similar remarks by Secretary-General Ban Ki-moon, who earlier this week called on the outgoing President of Senegal, Abdoulaye Wade, and Macky Sall, the reported winner of Sunday’s presidential run-off poll, to work together in the coming days in the interest of the country. Both Mr. Ban and Ms. Pillay had voiced concerns about the polls after a campaign marred by several deadly incidents. Protesters angry about Mr. Wade’s decision to seek a third term had taken to the streets of the capital, Dakar, and other cities in the run-up to the elections.

Ms. Pillay said that she regretted the violence in the run-up to the elections, but commended Mr. Wade’s swift acceptance of the latest election results.

“My office will continue to work with the new Government towards ensuring the enjoyment of all human rights for all people in Senegal,” she said.

The UN’s human rights chief also warned that other countries in West Africa, namely Mali and Guinea-Bissau, run the risk of having very different outcomes in the conduct of their elections.

In Mali, elements of the Malian armed forces seized control of the country last week, raising doubts about whether the elections planned for late April can take place, and whether the current conditions in the country can enable a genuine and fair vote.

“Unconstitutional changes of Government, accompanied by violence, can have a devastating impact on the human rights situation,” Ms. Pillay said. “Mali also had a good record of democratic elections over the past two decades, and I hope it gets back on that track as soon as possible.”

Guinea-Bissau held its first round of presidential elections on 18 March in which nine candidates competed, including former Prime Minister Carlos Gomes Junior and ex-president Kumba Yala, two months after the death of President Malam Bacai Sanhá.

Ms. Pillay described the elections as “tense but in the end, thankfully, free of violence,” noting that international observers including from the Economic Community of West African States, the Community of Portuguese Speaking Countries and the African Union found that the first round had been free, fair and transparent. However, five opposition candidates have threatened not to participate in the second round, after allegations of electoral fraud, increasing tension in the country.

“It is vital that the second round is also free and fair and violence-free,” Ms. Pillay said. “I call on all those taking part, especially the candidates and their supporters, to refrain from making provocative and inflammatory statements. I also call on all security forces to act in conformity with the law throughout this process.” 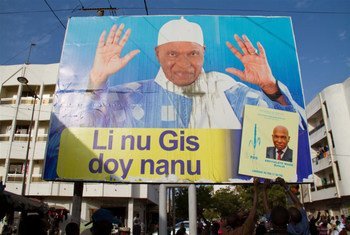 With presidential poll now over, Ban urges Senegalese leaders to work together

26 March 2012
Secretary-General Ban Ki-moon today called on the outgoing President of Senegal, Abdoulaye Wade, and Macky Sall, the reported winner of the presidential run-off poll, to work together in the coming days in the interest of the country.