9 March 2012
The head of the United Nations relief agency for Palestinian refugees today appealed to emerging economies to step up support for the organization, stressing the need for continued humanitarian support as parties to the Middle East conflict seek a political solution.

“We hope that other countries will step to the plate, share the burden of this important effort which is important to the stability of the region and beyond,” said the Commissioner General of the UN Relief and Works Agency for Palestine Refugees in the Near East (UNRWA), Filippo Grandi, in his appeal, which included a particular focus on the group often referred to as the BRICS countries – Brazil, Russia, India, China and South Africa.

UNRWA provides assistance, protection and advocacy for nearly five million registered Palestine refugees in Jordan, Lebanon, Syria and the occupied Palestinian territory. The agency is funded almost entirely by voluntary contributions from UN member states, and in January it launched an emergency appeal for just over $300 million.

At a press conference at UN Headquarters in New York, Mr. Grandi said some of those countries, notably Brazil and India, area already “stepping up to the plate” with contributions to UNRWA.

“We wanted to specifically send a message… to the BRICS countries, those countries that are emerging on the international scene as new economic and political powers,” he said, adding that Arab States are also chipping in, with Saudi Arabia emerging as the third-largest donor to UNRWA last year.

Mr. Grandi said the Israeli blockade of Gaza had caused an economic depression, noting that the economy there could no longer be sustained as it was in the past by a vibrant private sector that used to export into Israel and the West Bank.

“Those two markets continue to be barred and prohibited because of the blockade, something that we have encouraged our Israeli interlocutors to lift, not because UNRWA is directly involved in that particular aspect of the situation, but because the poverty that follows from the blockade generates humanitarian needs that we then have to support or meet with increasingly difficult resources to obtain,” said Mr. Grandi.

He noted that the 2010 easing of the blockade had allowed the implementation of some of UNRWA’s reconstruction projects.

“Unfortunately since the middle of last year no more projects of UNRWA have been approved for implementation,” Mr. Grandi said. “We hope, and we have said this may times to our Israeli interlocutors, that situation of no approval will be soon be overcome and we will be able to again receive positive responses to our requests to build schools and build houses because these are the two key projects that need to be carried out in Gaza by UNRWA.”

In regard to Lebanon, Mr. Grandi called for the implementation of legislative measures – passed a year and half ago by its parliament – to expand the right to work for the Palestinian refugees.

“They not yet been implemented partly because of the successive political transitions in Lebanon that have somehow slowed down the action of government, but we believe, and I have said so the Prime Minister whom I met just a few days ago, that we believe that the time has come to implement those measures,” he said.

On the situation in Syria, Mr. Grandi reiterated a call by other UN officials for access for aid workers to reach those in need of assistance there, including Palestinian beneficiaries of UNRWA services in that country. 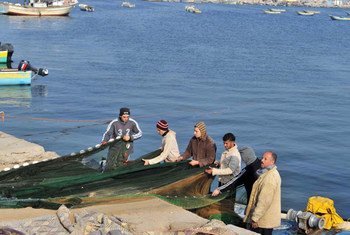 17 January 2012
The United Nations today launched an emergency appeal for just over $300 million to assist Palestinians living in the Gaza Strip and the West Bank who are still dealing with the effects of the conflict that ended three years ago as well as various humanitarian needs.