17 January 2012
The United Nations today launched an emergency appeal for just over $300 million to assist Palestinians living in the Gaza Strip and the West Bank who are still dealing with the effects of the conflict that ended three years ago as well as various humanitarian needs.

Israel launched a three-week offensive in Gaza in December 2008 with the stated aim of ending rocket attacks by Hamas and other groups. At least 1,300 Palestinians were killed and some 5,300 were injured in the heavy bombardment and fighting in densely populated areas, which reduced homes, schools, hospitals and marketplaces to rubble.

“The effects of the war still persist today and the humanitarian needs of the women, men and children of Gaza remain widespread and acute,” said Margot Ellis, Deputy Commissioner-General of the UN Relief and Works Agency for Palestine Refugees in the Near East (UNRWA).

A sizeable portion of the appeal also aims to protect the rights of refugees and improve their access to basic emergency health, water, sanitation, education, and temporary shelter.

Speaking at the Agency’s headquarters in Gaza, Ms. Ellis told reporters that “despite an easing of access, Gaza remains under a blockade and its population subject to collective punishment, an act illegal under international law.”

Israel imposed the blockade on Gaza for what it called security reasons after Hamas, which does not recognize Israel’s right to exist, ousted the Fatah movement in the Strip in 2007.

UNRWA noted that while this is a sizeable amount and reflects good progress, dozens more schools and thousands of homes still need to be built. It welcomed the steps made by the Israeli authorities in approving projects, while stressing the need to step up the pace of reconstruction.

“Three years on, UNRWA calls on the international community to work with the relevant parties to ease further the restrictions, give swifter approval for more projects and put an end to the blockade,” it stated.

The Agency added that the continuing blockade and the restrictions on exports have far reaching consequences which increase poverty and aid dependency and the demand for UNRWA’s emergency services.

A quarter of the UNRWA appeal is for the West Bank, where, according to Ms. Ellis, “forced displacements, settlement expansion, and settler violence are taking a devastating toll on the communities UNRWA serves.”

Since the beginning of 2011, nearly 1,100 Palestinians, including 618 children, have been displaced due to demolitions in East Jerusalem and Area C – the over 60 per cent of the West Bank where Israel retains control over security, planning and building – according to UNRWA. 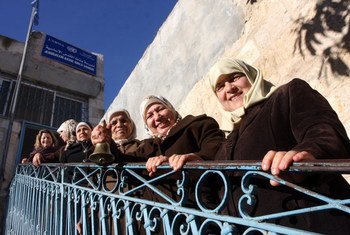 13 September 2011
The United Nations today renewed its appeal to donors to provide $36 million in urgently-needed funds to support emergency assistance to Palestinians living in the Gaza Strip.