UN Women to provide $10.5 million in grants for empowerment projects

The United Nations agency mandated to promote gender equality today announced it will give out $10.5 million in grants to organizations working to advance economic and political empowerment of women in Africa, Asia and the Pacific, Latin America and the Caribbean, and Europe and Central Asia.

According to a news release issued by the UN Entity for Gender Equality and the Empowerment of Women (UN Women), grants will start at $200,000 for initiatives that “make tangible improvements in the lives of women and girls, from enabling women candidates to run for office, to managing resources to support themselves and their families.” Approved proposals will be announced in October.

“UN Women’s Fund for Gender Equality provides direct grants for women’s empowerment and political participation,” said Michelle Bachelet, Executive Director for UN Women during an event at the Commission on the Status of Women in New York.

“These investments are essential for women and also for the promotion of gender equality, democracy and inclusive economic growth.”

Ms. Bachelet also announced the grant recipients from the agency’s earlier call in October for proposals from the Arab States. Fifteen organizations will receive grants totalling $4.85 million to work on innovative programmes that range from advancing women’s political participation in Egypt, Libya and Yemen, to maximizing the use of technology for advocacy and fostering sustainable development initiatives run by women in rural Morocco, Algeria and the occupied Palestinian territories.

“At this moment of historic change, we cannot afford to leave women out. These grants will advance women’s efforts to achieve greater economic and political equality during this time of transition,” said Ms. Bachelet.

Since its creation in 2009, the Fund has invested a total of $43 million in 40 countries around the world for projects working for gender equality.

♦ Receive daily updates directly in your inbox - Subscribe here to a topic.
♦ Download the UN News app for your iOS or Android devices.
UN Women

UN has benefitted from legacies of Eleanor and Franklin Roosevelt, says Ban 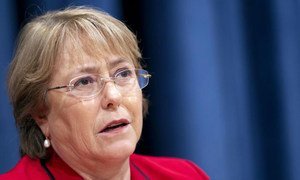 The head of the United Nations entity mandated to promote gender equality today said that her priority this year is to enhance the economic empowerment and political participation of women and called for the support of the international community and the entire UN system to ensure success.