UN Photo/Mark Garten
Michelle Bachelet, Executive Director of UN Women, discusses the Office on the one-year anniversary of its establishment.

2 February 2012
The head of the United Nations entity mandated to promote gender equality today said that her priority this year is to enhance the economic empowerment and political participation of women and called for the support of the international community and the entire UN system to ensure success.

“With rising demands for justice, upcoming elections in many countries and political transition, we have an opportunity to open doors wider for women,” said Michelle Bachelet, the Executive Director of the UN Entity for Gender Equality and the Empowerment of Women (UN Women), at a news conference in New York to mark the agency’s first anniversary.

“We simply can no longer afford to deny the full potential of one half of the population. The world needs to tap into the talent and wisdom of women. Whether the issue is food security, economic recovery, health, or peace and security, the participation of women is needed now more than ever,” she said.

Outlining the successes of UN Women over the past year, Ms. Bachelet said she was focused on building a strong organization with clear goals and strategies, adding that the agency had so far established a presence in 75 countries.

Examples of UN Women’s response to advance the cause of women’s equality included the support provided for women’s participation in constitutional reform, elections and political transition in Tunisia and Egypt, she said.

“In October, UN Women called out for concrete proposals from governments and civil society in Arab States to support women’s political participation and empowerment. In response, we are providing $4.8 million dollars through the Gender Equality Fund to advance women’s empowerment in the Arab world,” she added.

The agency also provided support to candidates, political parties, voters, electoral commissions and legislative efforts in more than 25 countries over the past year to ensure that more women voted and got elected. This year, UN Women will support women’s movements in 52 countries.

Contributions to UN Women last year totalled $235 million, a 33 per cent increase from 2010, she said, adding that the agency will intensify its efforts to raise $700 million for its work this year.

“During this time of austerity and uncertainty, we cannot let budget cuts and political change cut progress for girls and women,” said Ms. Bachelet.

Ms. Bachelet stressed that violence against women “diminished” humanity and cited UN Women’s first flagship report, entitled In Pursuit of Justice, which found that in many countries, the rule of law still excluded women. It is also found that legal reform, policy change, raising the number of women police and judges, and supporting women’s legal groups can ensure justice.

She underlined the need to include women in peacebuilding efforts, pointing out that UN Women had over the past year taken steps to ensure that women played a central role in peace talks, and that those affected by conflict got justice.

UN Women worked in more than 50 countries to build capacity on gender analysis and budgeting, using sex-disaggregated data to ensure gender sensitivity in the allocation of national resources.

On the requirement by governments that UN Women “lead, coordinate and enhance” the accountability of the UN system in its work on gender equality and the empowerment of women, she said that an action plan has been prepared to guide gender mainstreaming and accountability in the UN. 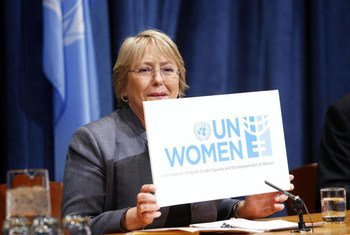 19 September 2011
Boosting women’s political participation and decision-making around the world is fundamental for democracy and essential for achieving sustainable development, women leaders taking part in a high-level event at the United Nations declared today.