27 February 2012
A United Nations-backed immunization campaign to eradicate polio among Central African children has been launched as part of urgent efforts to deal with the resurgence of the disease in the impoverished country.

A United Nations-backed immunization campaign to eradicate polio among Central African Republic children has been launched as part of urgent efforts to deal with the resurgence of the disease in the impoverished country.

Last year, CAR detected four imported cases of polio after two years without registering any cases. As a result, the Government is launching a vaccination campaign that seeks to reach children in hard-to-reach populations as well as those living in conflict and post-conflict zones where there is limited access to health services.

According to the UN Children’s Fund (UNICEF), CAR is particularly vulnerable to the spread of disease, given its numerous borders with countries where the polio virus still circulates. Ongoing violence and insecurity has exacerbated the situation and led to an estimated 171,751 internally displaced persons (IDPs) and returning refugees who lack access to basic medical care.

The campaign will have health workers going door to door to deliver polio vaccines, vitamin A supplements and provide de-worming treatment to hundreds of thousands of children between the ages of zero to five years old.

“Routine data shows that only 68 per cent of children in CAR under five years of age are completely vaccinated against polio, which means that 260,000 children under five are at risk of contracting the virus,” said Mary Louise Eagleton Meaney, Deputy Representative for UNICEF in the country during the campaign launch ceremony on Friday.

During the campaign, the World Health Organisation (WHO) and UNICEF will both be working to reinforce Government efforts towards immunization activities. WHO will be involved in the training and coordination of the vaccination teams as well as covering operational costs, while UNICEF will provide vitamin A supplements and de-worming tablets, as well as assist with the procurement of polio vaccines.

UNICEF will also provide technical assistance in vaccine distribution and engage with young people, women, media, and community, religious and political leaders to increase awareness about the campaign and ensure that parents understand the benefits of immunization.

In a news release issued by the agency, UNICEF said the campaign will also serve as part of its child survival and development programme, which aims to use existing low-cost and high-impact interventions to prevent child deaths. Currently, CAR’s mortality rate for children under five is higher than the region’s average. 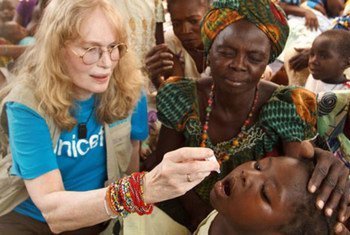