UNICEF/O. Asselin
Mia Farrow gives a boy a dose of oral polio vaccine at an immunisation site in Moundou, Chad.

“To see the eradication of polio would be very meaningful to me personally,” said Ms. Farrow, who had polio as a child and whose son, adopted from India, is paraplegic from polio.

“The challenge here in Chad is to convince all parents that the vaccine is safe and to reach every child, even in the most remote places,” she said at the launch ceremony on Friday.

The vaccination campaign, which is supported by the UN Children’s Fund (UNICEF), is part of a global push to eradicate the crippling disease. Last month, India made history by going a full year without a single case. Its success has been largely attributed to a major vaccination drive with millions of volunteers combing the country to vaccinate every single child, as well as an increase in access to clean water, sanitation and nutrition to help children absorb the vaccine and prevent the virus from spreading.

Last year, Chad, which was once polio free, had 132 new cases involving children, with only Pakistan registering more children affected by the disease in 2011. Chad has also exported the polio virus to other neighbouring countries, such as the Central African Republic (CAR) and experts fear that the great strides made in ending polio could be rolled back.

Ms. Farrow, a UNICEF Goodwill Ambassador since 2000, is now visiting the Democratic Republic of the Congo (DRC), which has also seen a re-emergence of the disease. During her trip, Ms. Farrow will visit the Kalemi region before heading to Bukavu in South Kivu province.

While in Chad, Ms. Farrow visited women and children in the country’s east who have been displaced by violence in the neighbouring Darfur region and in other parts of Chad. She also visited the city of Mao in the Sahel belt to spotlight the urgent need for life-saving assistance for an estimated 1.1 million children in the region who are severely malnourished.

According to UNICEF, an estimated one million young children in eight countries in the Sahel are in dire need of assistance. During a press briefing today in Geneva, the agency said it estimated it would need to procure almost 9,000 tons of ready-to use therapeutic food to treat children in the region. So far, UNICEF had received $11 million in funding, or 9.2 per cent out of a total estimated requirement of $120 million for this year. 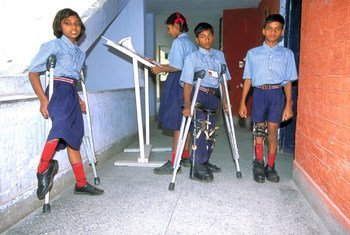 12 January 2012
With no registered polio cases over the past year, India is on course to becoming free of the disease, the United Nations World Health Organization (WHO) reported today.