Afghanistan: UN mission deplores attack on its compound in Kunduz

The United Nations Assistance Mission in Afghanistan (UNAMA) today deplored the attack on its compound in the north-eastern city of Kunduz, adding that no UN staff members were hurt and that all of them have been accounted for.

The mission thanked the Afghan National Security Forces (ANSF), notably the police, for their timely response to the attack and expressed regret for casualties among them.

“Although caused by legitimate defence, the United Nations also regrets the casualties among the demonstrators and expresses condolences to the families of those who lost their lives,” UNAMA said in a press release.

“UNAMA would like to reiterate the United Nations deep respect for Islam and understanding for the feelings of Muslims at the desecration of the Holy Qur'an.”

The mission urged those who wished to express their legitimate religious sentiments to reject calls to engage in violence, exercise restraint and avoid demonstrations that could allow “enemies of peace” to take advantage of the situation.

It said the people of Afghanistan invited the UN to work for peace, stability, security and prosperity of the country, adding that the Organization is determined to continue helping Afghans achieve those objectives.

“In this, the United Nations staff should enjoy the full protection of the people and authorities of the Islamic Republic of Afghanistan.”

Media reports stated that the violence in Kunduz was related to protests over the reported unintentional burning of copies of the Koran by United States soldiers in Afghanistan. Four people reportedly died and dozens were injured in Kunduz. 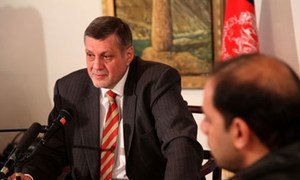 The United Nations today voiced its confidence that the NATO-led military force in Afghanistan will take appropriate action to hold accountable those responsible for the reported burning of copies of the Koran.