“I am very impressed that Zambia has been making good progress in Millennium Development Goals [MDGs], primary education, reducing mortality from HIV and maternal mortality, but it is evident that Zambia needs to do more,” Mr. Ban told reporters in the Zambia capital, Lusaka, after meeting with President Michael Sata.

He said the United Nations Conference on Sustainable Development (Rio+20) to be held in Brazil in June will be an important opportunity for world leaders to discuss and come up with ways to realize sustainable development, a top priority of the UN.

Responding to a reporter's question on discrimination based on sexual orientation, Mr. Ban stressed the need to ensure that all people, including lesbian, gay, bisexual and transgender (LGBT) members of society, are not denied their human rights.

“I have been urging many country's world leaders where the [people of those] countries with different sexual orientation have been discriminated, even punished, even criminalized… this is not acceptable and I know that President Sata has… principled position in promoting and protecting human rights of everybody regardless of their sexual orientation,” he said.

On tomorrow's first round of presidential elections in Senegal, Mr. Ban said he was concerned about the protests there and voiced his hope that the polls will be held “peacefully, in a credible and open and transparent manner so that the will of the people will be fully respected.”

Speaking at the Olympic Youth Development Centre in Lusaka, the Secretary General said sport goes beyond promoting excellence in a game. It also provides a healthier lifestyle for youth.

“Young people want education. Jobs. Dignity. Opportunity. That is why I pledge that the United Nations will not rest in helping countries to deliver on education, skills, training, sports and job-rich growth for young people.

“Centres like this can help in providing and supporting young people to have self-esteem, knowledge and skills for the future we want,” said Mr. Ban.

The Secretary-General also visited the Fountain of Hope Drop in Centre for vulnerable children, some of whom once lived in the streets, where he said he was impressed to see the youngsters healthy and learning life skills.

“Nothing is more important than investing in a country's children. A country that ignores or neglects its children destroys its own potential.

“A country that cares for and nurtures its children will definitely be strong,” the Secretary-General said. 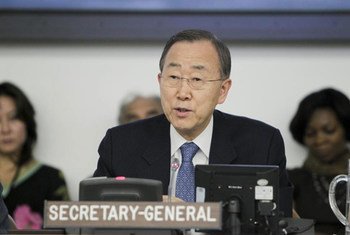 From democracy to soccer, Zambia’s successes offer example for all – Ban

24 February 2012
From its commitment to democracy to its soccer victory in the recent Africa Cup of Nations, Secretary-General Ban Ki-moon today lauded the Government and people of Zambia for serving as a shining example to the continent and the rest of the world.