The President of the General Assembly Nassir Abdulaziz Al-Nasser today stressed the importance of mediation in the early stages of conflicts, saying that seeking peaceful settlement of disputes before they become violent can save lives and ensure stability.

“There are lessons to be learned, particularly by those who insist on clinging to power against the will of their own people,” Mr. Al-Nasser said when he addressed the International Istanbul Conference on Mediation in Turkey, entitled 'Enhancing Peace Through Mediation: New Actors, Fresh Approaches, Bold Initiatives.'

“We should allow more room for mediation before conflicts erupt or situations worsen,” he told delegates at the conference that focused on the so-called “track II actors” in mediation ¬– civil society, research institutions, and former high level personalities – who, he said, are playing a growing role in resolving conflicts, building capacity and engaging in post-conflict reconstruction.

“In some cases, track II actors support and contribute to mediation processes. In others, they initiate, lead and successfully conclude entire processes,” said Mr. Al-Nasser.

He said the United Nations should support regional actors and initiatives to find lasting solutions to disputes.

“It is a welcome and encouraging development that the United Nations, including the Security Council, is listening more closely to regional actors, and taking into consideration their concerns before making critical decisions,” he added.

Mr. Al-Nasser announced that he will on 23 May convene an informal high-level meeting of the General Assembly in New York to discuss the role of Member States in mediation.

“Benefiting from the experience of eminent mediators, the meeting will seek to identify challenges to effectively dealing with regional and international conflicts,” he said.

He pointed out that the world is going through a challenging period of transition and that “all eyes are on the awakening taking place across the Arab world and other places. This flow of history cannot be stopped nor reversed.

“Tragically, many people have paid the ultimate price for the establishment of an accountable political system that respects the dignity and basic rights of its people,” Mr. Al-Nasser said, stressing that the bloody conflicts in Libya and Syria should remind the world of the importance of mediation.

His discussions with Mr. Erdogan centred on the latest developments in Syria. Mr. Al-Nasser commended Turkey for its leading mediation role in the region.

They also touched on a wide range of issues including, the revitalization of the General Assembly and Security Council reform and the strengthening of the Alliance of Civilizations.

Mr. Al-Nasser and Mr. Davutoglu stressed that the meeting of the Friends of Syria in Tunisia and the appointment of former UN Secretary-General Assembly Kofi Annan as Joint Special Envoy for Syria demonstrated the willingness and commitment of the international community to work together to resolve the crisis in that country. He welcomed the offer of Government of Turkey to host a second meeting on Syria next month.

At a joint press conference, Mr. Al-Nasser and Mr. Davutoglu urged the Syrian Government to immediately accept a plan proposed by the League of Arab States aimed at ending violence against civilians.

♦ Receive daily updates directly in your inbox - Subscribe here to a topic.
♦ Download the UN News app for your iOS or Android devices.
Al-Nasser 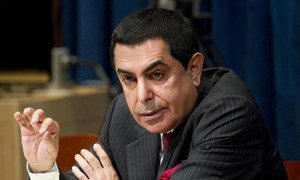 General Assembly chief Nassir Abdulaziz Al-Nasser reaffirmed the necessity of finding a peaceful solution to the ongoing crisis in Syria as he discussed the latest developments there with Turkish President Abdullah Gül.