IRIN/Lynn Maung
An elderly man and former prisoner in Myanmar is released from Yangon's Insein prison on 12 October 2011.

13 February 2012
The Secretary-General’s Special Adviser for Myanmar arrived in the country today for a five-day visit in which he will meet with Government authorities, political parties and civil society representatives, as the Asian nation moves ahead with planned reforms.

The United Nations recently welcomed the decision by Myanmar’s President Thein Sein to grant amnesty and set free a significant number of prisoners of conscience, and acknowledged other reform measures, including dialogue between the Government and the Nobel Peace Prize laureate Aung San Suu Kyi.

Special Adviser Vijay Nambiar told participants at a conference on development and policy options in Naypyitaw, the capital, that this is a crucial time for the country as it has the opportunity to address many development issues that will shape its future.

“Since the launch of the reform agenda, we have seen progress in various areas,” Mr. Nambiar said. “The challenges ahead are many and complex. The reform agenda might be ambitious, but it is achievable,” he said, adding that participation, partnerships and solidarity – not only between Myanmar’s various sectors but also with other countries – would be key factors for success.

Mr. Nambiar also stressed the importance of Myanmar focusing on achieving the anti-poverty targets known as the Millennium Development Goals (MDGs), as well as implementing measures that facilitate sustainable development in the country.

“Development is not sustainable unless it is equitable. In Myanmar, this entails equal access for all peoples in both central and border regions,” he said. “Investment in development is also the best prevention against social strife. Both State and society therefore have a stake in improving living standards as necessary conditions for the country’s unity and progress,” Mr. Nambiar added.

He reiterated the UN’s commitment to support Myanmar in implementing new measures and helping it “catch up with the changing world,” as stated by Mr. Sein.

“As the country builds on the steps taken so far, Myanmar should not be denied any longer the support and opportunity to serve its people better and build the economic conditions for durable peace and stability,” Mr. Nambiar said.

Ajay Chhibber, Assistant Administrator for the UN Development Programme (UNDP) echoed Mr. Nambiar’s remarks, citing the country’s recent progress in various development indicators such as health and education, and adding that these advances must be built on to keep the momentum of recent reforms. 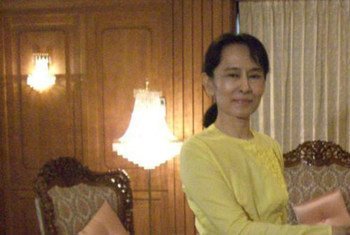 UNESCO ready to boost assistance as Myanmar moves ahead with reforms

10 February 2012
The United Nations Educational, Scientific and Cultural Organization (UNESCO), which is already assisting with a number of initiatives in Myanmar, voiced its readiness to work even more closely with the South-East Asian nation as it moves forward with planned reforms.