13 February 2012
The depletion of soil and the growing number of end-of-life nuclear power reactors are some of the most pressing environmental issues, according to a United Nations yearbook launched today that compiles the most important events and developments of the year.

“Superficially they may seem separate and unconnected issues, but both go to the heart of several fundamental questions: how will the world feed and fuel itself while combating climate change and handling hazardous wastes?”

According to UNEP, 24 per cent of the global land area has declined in productivity over the past 25 years due to unsustainable land-use. The yearbook points to various assessments indicating that some kinds of intensive agriculture are triggering soil erosion at rates that are about 100 times greater than the rates at which nature can form soil.

The yearbook also warns that without changes in the way land is managed, there will be grave losses in forests, peatlands and grasslands, as well as in biodiversity. In addition, land erosion will also affect climate change as huge amounts of carbon stored in the soil in the form of organic matter could be released in the atmosphere, aggravating global warming.

“The thin skin of soil on the Earth’s surface is often one of those forgotten ecosystems but it is among the most important to the future survival of humanity. The yearbook cites many options for improved, sustainable management such as no-till policies to ones that can assist in productive agriculture without draining peatlands,” said Mr Steiner.

The yearbook, launched on the eve of the 12th special session of the UNEP Governing Council/Global Ministerial Environment Forum, also highlights the importance of decommissioning the growing numbers of nuclear reactors that have reached the end of their original design lives.

As of last month, 138 civilian nuclear power reactors had been shut down in 19 countries, including 28 in the United States, 27 in the United Kingdom, 27 in Germany, 12 in France, nine in Japan and five in Russia. However, decommissioning has only been completed for 17 of them.

Mr. Steiner stated that the yearbook provides information about the options that countries have when making energy choices today regarding radioactive materials, safety procedures and financial implications. For example, the cost of decommissioning varies greatly depending on the reactor type and size, its location, the proximity and availability of waste disposal facilities and the condition of both the reactor and the site at the time of decommissioning. 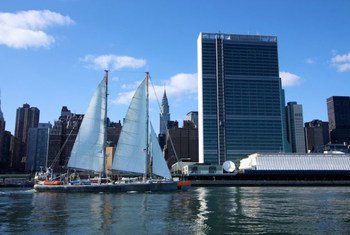 9 February 2012
A United Nations-backed scientific expedition which has been travelling the world’s oceans for almost three years is in New York seeking to raise public awareness of the impact of climate change in oceans.